Donald Trump is Obliterating ISIS Off the Face of the Earth 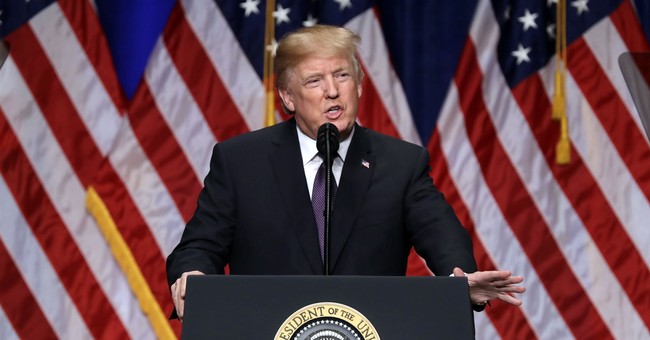 President Donald J. Trump has all but wiped the Islamic State off the face of the earth, a drastic change in the war on terror compared to the previous administration. In his administration's first 11 months alone, the military has freed twice as many people and recaptured twice as much land as under the previous 18 months, reports the Washington Examiner.

President Trump promised as a presidential candidate to “bomb the hell out of ISIS” and destroy the terrorist group once and for all. Since January, ISIS has dwindled from 35,000 members down to 1,000. Perhaps more astonishingly is the decrease in amount of land that the Islamic extremist group controls. When Trump assumed office, ISIS controlled nearly 17,000 square miles of land. Today, they control only 1,900 square miles.

More specifically, U.S. backed forces have liberated nearly 5.3 million people. The pinnacle of this liberation was the fall of the self-proclaimed capital of ISIS, Mosul. The northern Iraqi city underwent what was described as “the most significant urban combat to take place since World War II.”

When the western part of the city fell in June, thousands of civilians had died, but Iraqi forces prevailed and the will of ISIS had been broken.

“It just snowballed, and it turned into where we are right now, with a full liberation of Iraq, and in Syria, continuing to chase down ISIS elements, the remnants of ISIS elements, in Syria,” said Col. Ryan Dillon, the chief U.S. spokesman for the U.S. led coalition, known as Operation Inherent Resolve.

Many in the military credit what some may describe as a hands-off approach by Donald Trump. That is to say that rather than hamper the military and top commanders with bureaucratic politically correct nonsense, the commander-in-chief allows them to do what they do best- kill bad guys.

“Commanders now don't, aren't constantly calling back to higher headquarters asking for permission,” he said. “They're free to act.”

“These delegations of tactical authorities from the president has really made a difference on the ground,” McGurk said in August, “I've seen that with my own eyes.”

War, unfortunately, is hell. And with this increased combat method, comes higher civilian casualties. But Townsend maintains that is not the United States fault.

“I say this with full conviction: The responsibility for civilian casualties in Iraq and Syria lies with ISIS, who have brought misery and death to this region,” Townsend said.

It should be noted that simply because the United States is making incredible ground against the group, that does not necessarily mean that the fighting will end anytime soon.

"So right now, clearly ISIS is getting broken," Secretary of Defense James Mattis told reporters on Dec. 15. "I think there's still problems, the fight is not over with them, don't believe it when somebody says that ISIS is completely down. We're continuing to fight them, they're on the run, they can't hold against our alliance at all."