Gov. Brown Continues Campaign as the Voice of the So-Called Christian Left 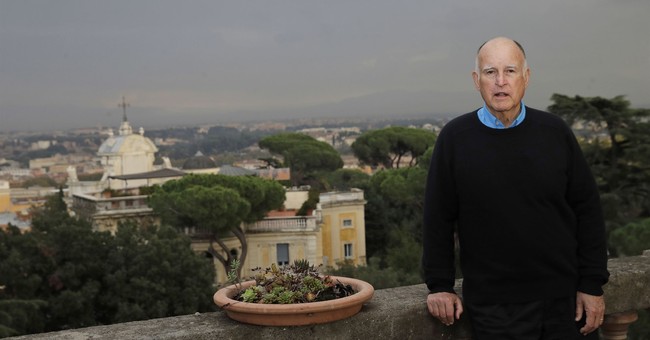 In an interview with 60 Minutes set to air on Sunday, California liberal Governor Jerry Brown carried his crusade as the voice of the Christian left, reports the Washington Times.

Areas of California have recently been badly scorched by wildfires, something Gov. Brown attributes to climate change. But, he says that President Donald J. Trump’s ego and lack of humility before God has led to inadequate policy to properly address these environmental disasters.

“I don’t think President Trump has a fear of the Lord, the fear of the wrath of God, which leads one to more humility … and this is such a reckless disregard for the truth and for the existential consequences that can be unleashed,” Mr. Brown said, according to excerpts of the interview released Friday evening by CBS News.

“We have a cap and trade system, which is a very efficient way to reducing greenhouse gases. We have zero-emission vehicle mandate. We have efficiency standards for our buildings, for our appliances. California is showing that dealing with climate is good for the economy, not bad,” he said.

In 2015, Gov. Brown said that GOP opposition to President Obama’s immigration plan was "at best...troglodyte and at worst is un-Christian."  He also said that not supporting Obama’s efforts were “ immoral.”

In the 60 Minutes interview, he also added that he believes California is a model for the rest of country. "It's a culture that's on the move -- not pulling up the drawbridge out of fear and economic insecurity."

Share this on Facebook
Tweet
Heritage Foundation President: 'Juneteenth is a Perfect Answer' to Critical Race Theory
Landon Mion
Here's What Kevin McCarthy Said When Asked Whether Trump Should Be Speaker of the House
Scott Morefield