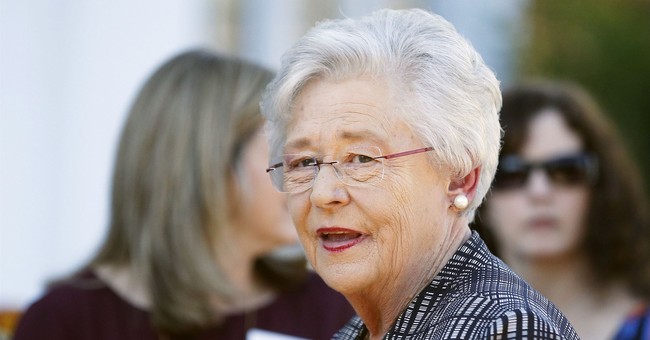 The preponderance of alleged sexual impropriety committed by Alabama Republican senate candidate Judge Roy Moore has yet to dissuade several prominent Republicans from voting for him. Alabama Governor Kay Ivey announced Friday she still supports Moore. Ivey specifically said she does so due to potential Supreme Court vacancies.

"I believe in the Republican Party, what we stand for, and most important, we need to have a Republican in the United States Senate to vote on things like Supreme Court justices, other appointments the Senate has to confirm and make major decisions,” Ivey told reporters on Friday. Ivey also said she has no reason not to believe Moore's accusers, but noted that the timing of their accusations is "curious."

Roy Moore is accused by various women in the state of Alabama for either dating or attempting to make sexual advances towards them when they were teenagers. One woman claims this happened when she was as young as 14 and Moore was in his 30s. The most heinous of these allegations comes from Beverly Nelson, who says Roy Moore raped her when she was 16.

But, unless there is hidden audio, video, or some other photographic evidence, there is no way to prove that these women are telling the truth. However, Daily Wire writer and Twitter extraordinaire Matt Walsh summed up the situation nicely:

At this point you either have to believe that dozens upon dozens of regular people are liars -- or Roy Moore is a liar. https://t.co/nZ7lUPQmTq

Gov. Ivey’s position is truly no different than Washington Post columnist Kate Harding’s stance on Al Franken. There is actual photo evidence that Franken assaulted a sleeping Leeann Tweeden. Plus, Tweeden accused  the former Saturday Night Live host  of shoving his tongue down her throat without consent. Yet Harding is willing to forgo her moral compass to allow Franken to stay in power. To Harding, Franken should remain in power because he is voting the right way. He has a chance,  in her mind, to protect women through future votes. Harding says her position can still change. "Only one woman has alleged that Franken assaulted her; if her story emboldens others to tell theirs, and the senator is revealed to be a serial predator, then I wouldn’t want him in a position of power for one more minute.”

Now, to be fair, Leeann Tweeden has said that she does not want Sen. Franken to step down. She maintains her only goal was to empower other victims of sexual assault to come forward. What Leeann Tweeden went through is clearly very traumatic. It was brave of her to come forward, especially against a person of power both in Hollywood and in Congress. But, unless Franken is punished, how emboldened will other assault victims be to reveal their stories? What good is it if victims come forward, but then no consequences occur to the perpetrator once it is determined they are telling the truth?

Harding and Ivey are both playing to the ugliness that pervades American politics; tribalism. Ivey puts forth quite explicitly that her allegiance is to the GOP. Harding says she is loyal to Democrats. Ivey says she has no reason not to believe the women, but justifies her decision because of the Supreme Court. Harding essentially says one woman is not that bad, so why bother getting rid of Franken and lose votes? The two are putting their tribes - Democrats and Republicans - ahead of individuals.

The problem is both these public figures view the battle between the GOP and the Democrat Party as a true civil war. Both are taking radical positions and truly embracing Saul Alinsky. One of his famed rules is, “In war, the end justifies almost any means.” Like many Americans, these two are putting their short term goals ahead of what should be their rock solid principles.