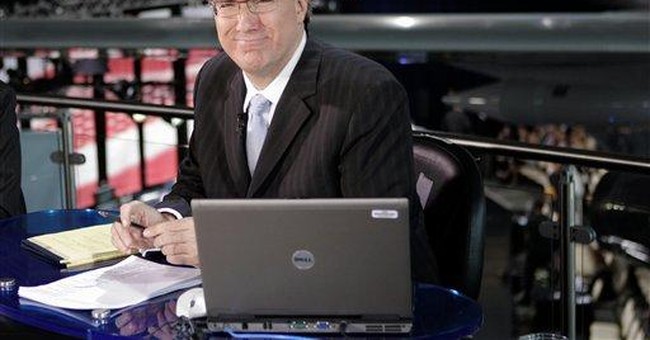 It is no secret that the American left has been apoplectic since the election of President Donald J. Trump. Failed-sports-anchor-turned-failed-political-pundit-turned-failed-author* Keith Olbermann in particularly has been having what can only be described as a nervous break down for the past year.

Hey @Jack, please explain the rationale for suspending Roger Stone, but not Keith Olbermann. -- Signed, every conservative on Twitter. pic.twitter.com/i4JhSO5aD0

But, his most outrageous comments came on ABC's The View yesterday.

Why do you separate yourself from the terrorists, Dondi? You and your family have done more damage to America than Bin Laden + ISIS combined https://t.co/TaKeIP6RFt

As the Daily Caller reported, he defended these asinine opinions on The View.

“Yes,” Olbermann replied. “Yeah, we did really well after 9/11, I don’t think the country has given itself enough credit for what we did not do after 9/11… we did not restrict all of the freedoms in this country, we did not single out people.”

As the video shows, these were not some flippant remarks. Olbermann tries to make an argument that the man elected by the people of the America is more dangerous to the country than Islamic terrorists, whose sole mission is to kill and enslave the United States. Even some of the hosts give credence to this stand point.

Moments like these are difficult to respond to. It is perplexing that somebody such as Olbermann actually believes these statements. It is unclear if he is really does think that President Trump wants to destroy and kill Americans, or if he is using these comments to improve book sales or his status amongst the "resistance."  But Townhall Political Editor Guy Benson poignantly summarized an appropriate response to these comments via Twitter.

* I actually think Olbermann was fantastic on SportsCenter, but that's irrelevant