Former NPR CEO Actually Talks to Conservatives, Has a Change of Heart 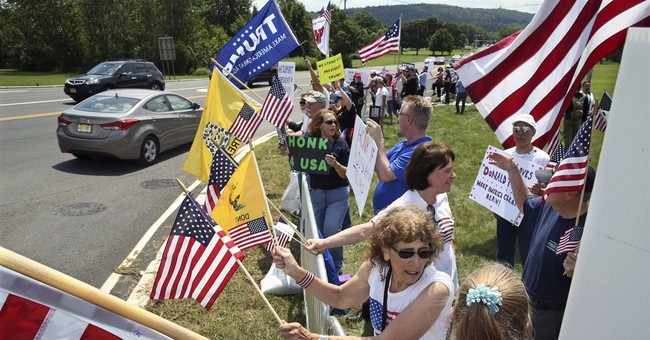 A former NPR CEO decided to take a year off from work to surround himself with conservatives, Trump supporters, and Evangelical christians - groups he admittedly only “knew through Jerry Falwell and the movie Foot Loose.” In turn, he found a group of people deeply engaged in caring for others, a justifiable dissatisfaction for the mainstream media, and even developed a sense of appreciation for guns.

In the New York Post, Ken Stern details what it was like to actually speak with Trump supporters and those outside of his liberal bubble.

"This may seem like an unusual admission from someone who once ran NPR, but it is borne of recent experience. Spurred by a fear that red and blue America were drifting irrevocably apart, I decided to venture out from my overwhelmingly Democratic neighborhood and engage Republicans where they live, work and pray. For an entire year, I embedded myself with the other side, standing in pit row at a NASCAR race, hanging out at Tea Party meetings and sitting in on Steve Bannon’s radio show. I found an America far different from the one depicted in the press and imagined by presidents (“cling to guns or religion”) and presidential candidates (“basket of deplorables”) alike."

He starts off by describing his surprise that Christians actually practiced the values Christ promoted such as caring for others and helping the poor.

"I spent many Sundays in evangelical churches and hung out with 15,000 evangelical youth at the Urbana conference. I wasn’t sure what to expect among thousands of college-age evangelicals, but I certainly didn’t expect the intense discussion of racial equity and refugee issues — how to help them, not how to keep them out — but that is what I got.

At Urbana, I met dozens of people who were dedicating their lives to the mission, spreading the good news of Jesus, of course, but doing so through a life of charity and compassion for others: staffing remote hospitals, building homes for the homeless and, in one case, flying a “powered parachute” over miles of uninhabited jungle in the western Congo to bring a little bit of entertainment, education and relief to some of the remotest villages you could imagine. It was all inspiring — and a little foolhardy, if you ask me about the safety of a powered parachute — but it left me with a very different impression of a community that was previously known to me only through Jerry Falwell and the movie “Footloose.”

On guns, Stern offers two separate examples of how he came to understand not only guns better, but how the media portrays NRA members in a bad light.

I linked up with a group of friends from Houston who belied the demographic stereotyping of the hunt; collectively we were the equivalent of a bad bar joke: a Hispanic ex-soldier, a young black family man, a Serbian immigrant and a Jew from DC.

None of my new hunting partners fit the lazy caricature of the angry NRA member. Rather, they saw guns as both a shared sport and as a necessary means to protect their families during uncertain times. In truth, the only one who was even modestly angry was me, and that only had to do with my terrible ineptness as a hunter. In the end though, I did bag a pig, or at least my new friends were willing to award me a kill, so that we could all glory together in the fraternity of the hunt."

He goes on to highlight a story about a man protecting his store from a would-be-robber by exercising his second amendment right. A story that he only found on reddit and would never find in the mainstream media, by his own words.

“Over the course of this past year, I have tried to consume media as they do and understand it as a partisan player. It is not so hard to do. Take guns. Gun control and gun rights is one of our most divisive issues, and there are legitimate points on both sides. But media is obsessed with the gun-control side and gives only scant, mostly negative, recognition to the gun-rights sides.

Take for instance the issue of the legitimate defensive gun use (DGUs), which is often dismissed by the media as myth. But DGUs happen all the time — 200 times a day, according to the Department of Justice, or 5,000 times a day according to an overly exuberant Florida State University study. But whichever study you choose to believe, DGUs happen frequently and give credence to my hunting friends who see their guns as the last line of defense for themselves and their families.

At one point during my research, I discovered a video of a would-be robber entering a Houston smoke shop, his purpose conveyed by the pistol that he leveled at the store clerk. But the robber was not the only armed person in the store. The security cameras show Raleigh, the store clerk, walking out from behind the counter, calmly raising his own gun and firing an accurate stream of bullets at the hapless robber. The wounded robber stumbles out, falls over the curb and eventually ends up under arrest.

It is not just the defensive gun use that makes the video remarkable — it is Raleigh himself who evidences such a nonchalance that he never bothers to put down the cigarette that he is smoking. At the end, Raleigh, having protected his store, enthuses “Castle Doctrine, baby” — citing a law that allows a person to use force to defend a legally occupied place.

It is an amazing story, though far from unique, but you simply won’t find many like it in mainstream media (I found it on Reddit).

It’s not that media is suppressing stories intentionally. It’s that these stories don’t reflect their interests and beliefs.”

His last sentence in that paragraph is particularly telling. Most in the mainstream media do not believe that there is a liberal bias because they have never stepped out their comfort zone like Stern did. Stern is a former CEO of NPR, one of the most influential media entities in the nation. Even he did not realize the inaccurate portrayals of right leaning individuals until he met them firsthand.

The full article is well worth the read.

If you are a conservative reading this, I would advise sharing it with a liberal. It may help convince your left leaning friend that mainstream media bias exists and that most Trump supporters are poorly portrayed by hearing these things from an NPR liberal. If you are a liberal, I would recommend that you share the article as well and thank you for opening your mind by reading Townhall.com.