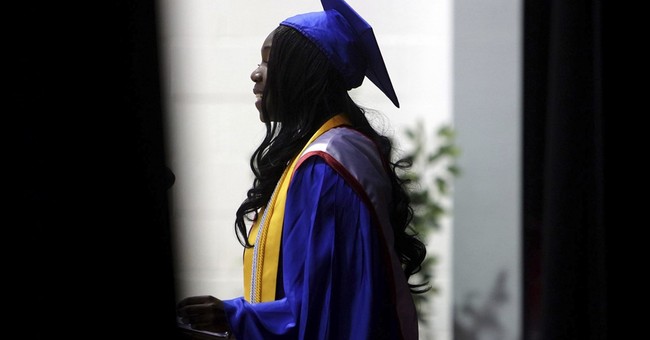 High schools are increasingly ditching giving the graduating senior with the top grades in his or her respective class the traditional valedictorian award, reports the Wall Street Journal.

“I think it’s pretty stupid, and I don’t think it’s fair” said Ryan Walters, a promising student who most likely could have been a top contender for the award before his high school decided against giving it out. “Wake County is instilling in us that we shouldn’t try to be the best,” added Walters, commenting on his school district in Wake Forest, North Carolina.

Heritage High School, Walters’ school, is not alone in getting rid of the award. At least half the United States high schools have stopped giving the award or they name multiple valedictorians for the graduating class.

Officials argue that the award can cause overly competitive students and unnecessary stress. Down the road from TownHall HQ, Washington-Lee High School in Arlington, Virginia had 178 valedictorians, all one needed for this award a 4.0 or higher GPA.

Some schools say it has been a positive for students to get rid of the award. Administrators say it allows students to be more eligible for scholarships and other advantages from college.  “We found that [naming one valedictorian] is shutting our students out from some really positive opportunities” said Scott Martzloff, a superintendent in Western New York.

However, not everybody is following this trend. A school just outside of Boston, Massachusetts recently reverted back to naming one singular student as the best and the brightest in the school. Students at Melrose High School demanded the administration bring it back.

As for Wake High School, Ryan Walters added “Wake County is recognizing mediocrity, not greatness.” In other words, if everybody is special, then no body is.

In 2010, Dennis Prager published a column on this site he said "every high school principal should give." The administrators of Wake County and other school districts who have ditched the prestigious valedictorian award should give it a read. The fifth "change" Prager said schools should make is rather poignant.

"Fifth, we will end all self-esteem programs. In this school, self-esteem will be attained in only one way -- the way people attained it until decided otherwise a generation ago -- by earning it. One immediate consequence is that there will be one valedictorian, not eight."