Reminder: Obama Paid the NFL Millions to Be Patriotic 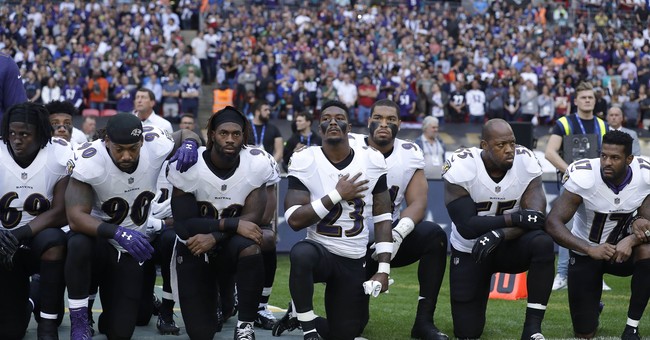 President Donald J. Trump doubled down on his rhetoric against National Football League (NFL) players who refuse to stand for the national anthem on Sunday morning, but fans should be reminded the NFL's patriotism is relatively new in the league.

NFL Commissioner Roger Goodell claims that the "NFL and players are at our best when we help create a sense of unity in our country and our culture," but their weekly show of support towards members of the American military began only after NFL owners realized they could make money off it.

In 2009, Barack Obama's Department of Defense began paying hundreds of thousands towards teams in a marketing strategy designed to show support for the troops and increase recruitments. The NFL then required all players and personnel to be on the sidelines during the national anthem, in exchange for taxpayer dollars. Prior, the national anthem was played in the stadium but players had the option of staying in the locker room before heading out to the field.

Furthermore, teams that showed "Veteran's Salutes" during games were paid upwards of $5.1 million.

The NFL has shown degrees of patriotism at different times such as after 9/11, but as Sen. Jeff Flake (R-AZ), noted in 2015, “Those of us go to sporting events and see them honoring the heroes; you get a good feeling in your heart. Then to find out they’re doing it because they’re compensated for it, it leaves you underwhelmed. It seems a little unseemly.”

Presently, Donald Trump is encouraging fans to boycott the NFL if the league refuses to "back the U.S."

President Trump sparked national controversy on Friday night when he said NFL owners should "get that son of a b**ch off the field" if a player is not standing for the flag as way of showing protest against police brutality.

This garnered strong responses from NFL owners across the league from teams such as the San Francisco 49ers, Green Bay Packers, Miami Dolphins, and Atlanta Falcons. Most notably though, was the condemnation from Trump's longtime friend and 5-time Super Bowl champion New England Patriots owner, Robert Kraft.

Kraft said he was "deeply disappointed" in the "tone" used by President Trump on Friday night.

Shortly after President Trump's early Sunday morning tweets, players and coaches from the Baltimore Ravens and the Jacksonville Jaguars sent a defiant message to the commander-in-chief. During the national anthem at the annual international game played in London, England, the two teams linked arms with many players kneeling.

A multitude of #Ravens and #Jaguars players kneeling during the National Anthem this morning, the rest of the team locking arms in unison pic.twitter.com/c97tPS9PxC

These kind of protests have led to dismal ratings for the NFL and have caused some viewers to stop watching all together. More protests are expected throughout the day.