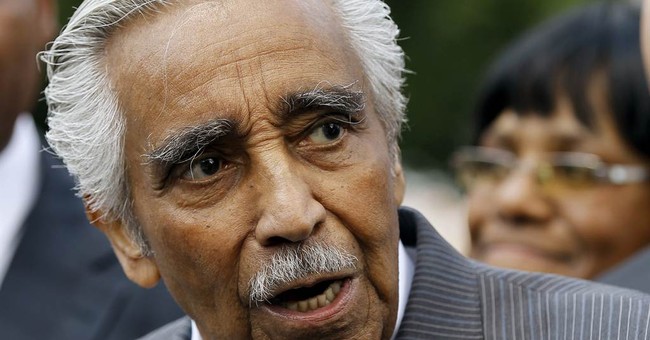 Congressman Charlie Rangel (D-NY) made some colorful remarks in a Daily Beast interview released Friday. Most notably, he called Tea Partiers and other Republicans "white crackers."

House Republicans? Have done more damage to American competitiveness than al Qaeda ever could. “What is happening is sabotage. Terrorists couldn’t do a better job than the Republicans are doing.”

The Tea Party? Defeat them the same way segregation was beaten. “It is the same group we faced in the South with those white crackers and the dogs and the police.

The term "cracker" has been all over the news lately. In the midst of the George Zimmerman trial, for instance, Trayvon Martin's friend Rachel Jeantel called the defendant a "creepy ass cracker" during her testimony. Despite Jeantel's equivocations, those familiar with the word know that it has always referred to poor whites. Of course it's a racial slur.

This begs the question -- why is it deemed acceptable for a sitting congressman to use the word? No one in the mainstream media seems to care as Rangel says it nonchalantly in an on-the-record interview.

If racial slurs against minorities are taboo, why do anti-white slurs escape scrutiny? The media ruined Paula Deen's career for admitting that she used the N-word decades ago in private, but it couldn't care less about an elected official's public bigotry against whites.

Rangel and his defenders operate under the flawed assumption that anti-white bigotry is impossible, when in fact bigotry against whites (especially Southern whites) is more popular than ever. Liberal media elites love political correctness when it comes to "disadvantaged groups," but there's nothing they love more than to demean working-class whites and Southerners (just check out TLC's Here Comes Honey Boo Boo, a monstrous example of the media's ridiculous anti-white, anti-Southern stereotyping).

Someone should hold Charlie Rangel accountable for his carefree bigotry, but I'm not holding my breath. These are the times we live in.