Stand Up to the Campus Bullies Before It’s Too Late 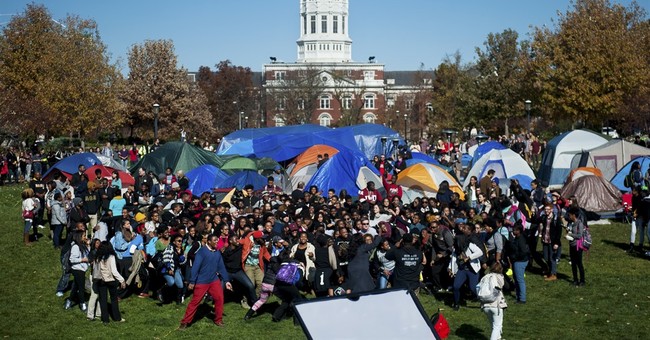 Last fall, students at the University of Missouri seized the national spotlight with racially-themed protests, targeting the school administration and society at large for their perceived lack of a response to incidents of racial bias. Led by the newly-formed group Concerned Student 1950, Mizzou students inspired college students around the country to denounce their schools as racist, sexist, transphobic hellholes with conditions so deplorable as to make daily life for students almost unbearable.

To be fair, some of the incidents that sparked the movement at Mizzou are troubling. Nobody deserves to be exposed to racist graffiti or have slurs hurled at them. But does that warrant the removal of the university president? How about shutting down campus and kicking out reporters? Around the country, many people found themselves scratching their heads and thinking, “Wait, what were they protesting again?” That’s because the main premise of the movement made little sense. Concerned Student 1950 alleged systemic discrimination because a handful of students out of a university of 27,000 undergraduates voiced their racist messages. Of course that’s wrong, but it hardly indicates an administration-approved climate of racism.

That doesn’t matter. It provided a platform for student radicals to begin to remake universities in their image, and whoever doesn’t go along with it is a racist.

Now, student protesters across the country want change and most have sent lists of demands to their respective administrations, each with a varying degree of petulance. The demands differ some from school to school, but the themes are consistent: punishing students for speech they don’t like, mandatory classes indoctrinating students with the mantras of the social justice movement, and an explosive growth in spending on services and goodies that are exclusively available to students of a minority race. Several university leaders have already agreed to meet some of these demands. Before any more decide to forego a real debate and bow to the pressure of campus radicals, let’s step back and take a look at what this would mean for higher education in America.

The student protesters at Yale put central importance on the restructuring of the undergraduate curriculum to require a new racial studies class for all students. Most similarly-affiliated groups of students have demanded some kind of mandatory racial instruction. At my own school, George Mason University, a group calling themselves “Concerned Mason Students” want an “awareness and inclusion curriculum,” but with a few stipulations. The curriculum is to be overseen by a panel of people of color, preferably those who have experience in “anti-oppression activism.” The implications of this are as clear as day - these students want nothing less than to adorn themselves with glossy titles while they dictate to their 23,000 classmates which thoughts and ideas are acceptable in this institution of “higher learning.” In addition, race relation courses must be taught by a black professor. How inclusive.

An aversion against language and ideas that might cause discomfort is nothing new on college campuses. One professor at Washington State University threatened to fail his students if they used terms like “male”, “female”, “illegal alien”, or if they failed to “defer” to non-white students in classroom discussions. But now, this anti-intellectual culture is being weaponized, and students are facing worse consequences than the disdain of their professors or marks off of their papers. For example, students at Amherst College are demanding that the university administration put students under disciplinary proceedings if a “formal complaint” about their speech is filed. Those with complaints against them must also undergo racial and competency training. I can’t imagine what it would be like to study in constant fear of prosecution by the school for saying something offensive, but I don’t want to find out. Especially when there is such blatant disregard for due process and the only requisite for investigations to commence is a report filed by a student who heard something he/she didn’t like.

At UC Irvine, the Black Student Union wants instances of “anti-blackness” to result in student probation for at least an entire quarter, and for any student organization affiliated with such instances to be immediately dismantled. They say that the culprits should appear before a panel of three students majoring in African-American studies, who have the autonomy to hand down whatever sentence they deem appropriate.

The new proposals aren’t limited to students. A list of demands released at Duke University includes a point that employees should lose their tenure status and/or their job if they “perpetuate hate speech that threatens the safety of students of color.” Firing is also acceptable if employees have a “discriminatory attitude.”

The purpose of all these newly proposed speech codes is aimed squarely at creating a bubble environment to insulate snowflake students. Confront them with ideas that fall outside of their tightly defined ideology, and they’ll melt away. Isn’t it strange that these groups with such strong convictions are hell-bent on preventing anyone from questioning them? Spend some time reading through their demands, and it won’t be strange at all. That’s because in a free market of ideas, the demands of campus radicals can’t compete.

On top of all of this are proposals to dramatically increase university spending on student services. Protestors at Yale demanded that two million dollars be added to the operational budgets of each of their four cultural centers, for a total price tag of 8 million. Simmons College students are calling for their school to pay for a civil rights lawyer on retainer who may only represent students of color in cases of alleged discrimination. At Emory, students support an increase in pay for administrators and faculty, but only those who are black. The “Black Student 10 Point Plan” at Eastern Michigan University demands the hiring of black financial advisors “whose sole purpose is to find and distribute scholarships and financial aid to black students specifically.” Keep in mind that those claiming to promote equality within these movements support institutionalizing a lopsided system of financial benefits for students and faculty on the basis of race. The list goes on and on, with the two central trends being calls for extraordinary increases in college expenditures and almost no proposals for how to pay for them.

Adding to the irony, these student groups finish off their college wish lists insisting on no increased costs to students and moratoriums on tuition. The reality is that one of the biggest factors driving college spending increases in the first decade of the 21st century has been funding for student services. Universities have allowed this runaway spending in order to attract students and faculty, most of whom have no idea how and where their schools spend their money. Stephen Pearlstein at the Washington Post argues that this is made possible by an academic culture where “accountability” is seen as an assault and “productivity” is seen as anti-intellectual. And he’s exactly right, which is why colleges and universities literally cannot afford to promise even more to activist student groups who are completely ignorant to the impact of spending increases.

In the now infamous video of one Yale student protester screaming in the face of a professor, she shrieks, “It’s not about creating an intellectual space!” And in doing so, she inadvertently revealed the anti-intellectual nature of today’s campus protesters. Their intentions are plain for all to see, and they are rooted not in some noble idea of inclusion, but in silencing anyone who dares to question their crusade. At least the political science and humanities classes infused with liberal philosophy we have in our classrooms today claim to be accepting of all ideologies. These proposals make no attempt to hide their goal of indoctrination. For the sake of students’ education, this trend cannot continue. Thus far, institutions of higher education have been disturbingly receptive to the social justice zealots taking over campus. A few have decided to show some spine, like President James Wagner of Emory University, who defended everyone’s right to free expression when students lost their collective minds over chalked political messages on campus. Stories like these offer a glimmer of hope, but sadly, they make up a small minority of the bigger picture today. It’s time for the rest of us to take a stand and ensure that our colleges and universities are kept as safe spaces for ideas, not for feelings.