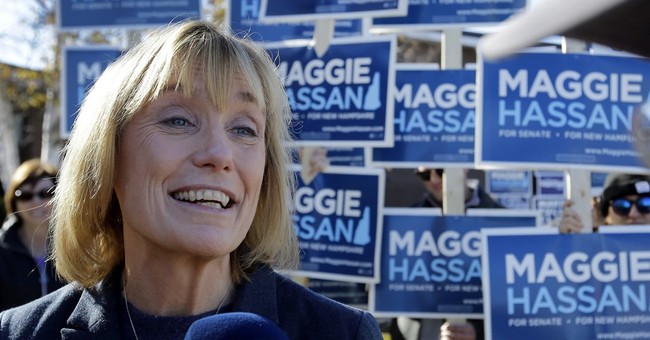 While Democrat U.S. Senator Maggie Hassan is expected to win her New Hampshire primary on September 13, her general election prospects have gotten a bit dicier according to new polling from the New Hampshire Institute of Politics at Saint Anselm College.

When Granite State voters were asked whether Hassan — the state's former governor — had done a good job and deserved to be reelected to the U.S. Senate, just 39 percent said they thought Hassan should be given another six years in the upper chamber. More voters, 53 percent, said it's "time to give someone new a chance."

Do you think Senator Maggie Hassan (D) has done a good enough job to deserve re-election, or is it time to give someone new a chance?

The poll also showed that Hassan remains underwater when it comes to overall approval, 51 percent to 44 percent, and 68 percent of New Hampshire voters believe the country is headed in the wrong direction compared to 21 percent who think America is on the right track.

On the generic congressional ballot question, the GOP holds a slight edge in New Hampshire with 46 percent compared to Democrats' 43 percent.

Recommended
Arrest Him at the Airport
Alan Joseph Bauer

Across the aisle looking to challenge Hassan in November's general are several GOP primary candidates with Don Bolduc in the lead according to the Saint Anselm College survey: