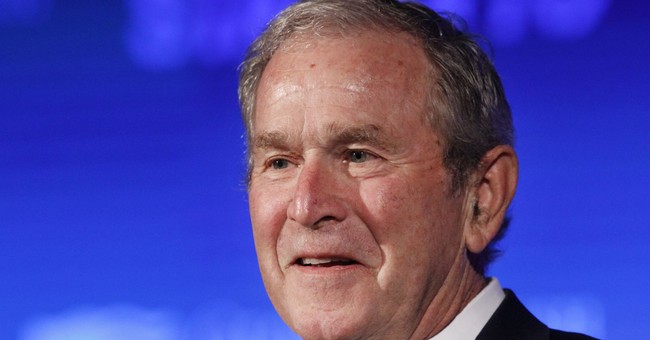 It's not news that President Biden's open-border policies have created multiple crises for the United States. It's a humanitarian crisis, a public health crisis, and a national security crisis. In recent days, multiple stories have come to light that illustrate how much of a liability the unsecured, wide-open U.S.-Mexico border is to Americans, and this one might be the craziest yet.

According to a Forbes exclusive, an alleged ISIS operative already inside the United States was plotting to assassinate former President George W. Bush in Texas via a plot that involved smuggling fellow ISIS terrorists through the porous southern border and included a trip to Dallas to surveil Bush's home and presidential institute.

This story is insane…

An alleged ISIS-linked operative planned to use Biden’s open border to smuggle in terrorists to assassinate George W. Bush. https://t.co/sO9ihVQof1

The alleged plotter — identified by Fox News as Shihab Ahmed Shihab — has been arrested and is set to appear in federal court soon to face charges for his assassination plot.

According to the warrant application filed on March 23 and obtained by Forbes, the individual being tracked by federal authorities planned on getting "Mexican visitor visas for the ISIS operatives, using passport information he would send to the informant over WhatsApp, before getting them over the border" that the Biden administration insists is "closed." But as the FBI's warrant application describes, the alleged plotter "claimed to have had just [in December] smuggled two individuals associated with Hezbollah — a terrorist organization, according to the U.S. — into the U.S. for a fee of $50,000 each."

Here's how the investigation played out, according to Forbes:

The FBI said it uncovered the scheme through the work of two confidential informants and surveillance of the alleged plotter’s account on the Meta-owned WhatsApp messaging platform. The suspect, based in Columbus, Ohio, said he wanted to assassinate Bush because he felt the former president was responsible for killing many Iraqis and breaking apart the country after the 2003 U.S. military invasion, according to the warrant.

The case shows how federal investigators continue to monitor threats from ISIS even as the group has been severely weakened by American intelligence and military operations in recent years. It also shows how the FBI, despite its claims of being prevented from investigating major crimes because of Meta and other tech providers’ use of encryption, has been able to work around WhatsApp security by using old-school policing with sourcing of informants and tracking the metadata they can get from the messaging company.

The alleged plot organizer is an Iraqi national who’d been in the U.S. since 2020 and had an asylum application pending, according to the FBI’s search-warrant application. Federal agents used two different confidential sources to investigate the plot, one who claimed to offer assistance obtaining false immigration and identification documents, the second a purported customer of the alleged people smuggler, who was willing to pay thousands of dollars to bring his family into the country.

Forbes' report follows Monday's revelations that, of the known suspected terrorists who have been caught crossing the U.S.-Mexico border, at least one was released by federal authorities after illegally entering the United States and was on the lam for two weeks before being rearrested.