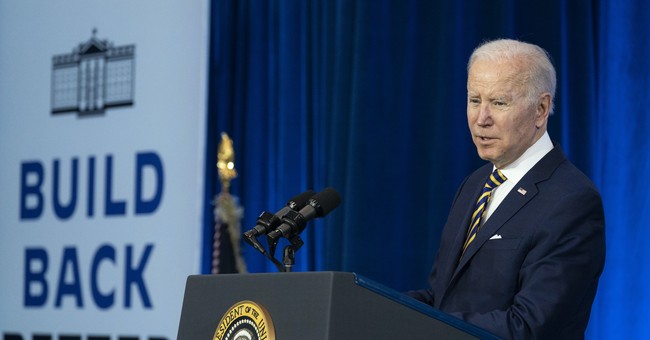 Proving that indeed, a biased, partisan, broken clock can be right twice a day, the folks over at Vox have stumbled upon reality that rebuts what Democrats — including President Joe Biden, House Speaker Nancy Pelosi, and Senate Majority Leader Chuck Schumer — have claimed about the radical budgetary plans they haven't been able to pass through the Democrat-led Congress.

Noting the stalemate for Biden's "build back better" budget (that is as woke as can be, not to mention wasteful) means the president and his party have little to show for their 15 or so months in power other than the "American Rescue Plan" passed last March, Vox asks an obvious question: Did Biden and Democrats' big spending binge "contribute to the country’s current inflationary mess?"

Vox apparently found it impossible to ignore reality or parrot the Biden administration's claims about the need for even more spending to fight inflation:

Countries around the world are struggling with inflation due to pandemic disruptions, but the Biden stimulus made the US’s inflation problem more severe, to at least some extent. “I think we can say with certainty that we would have less inflation and fewer problems that we need to solve right now if the American Rescue Plan had been optimally sized,” said Wendy Edelberg, a senior fellow in economic studies at the Brookings Institution.

Inflation has brought with it two big problems. The first is already evident: Because most Americans’ wages haven’t risen enough to keep up with it, real (inflation-adjusted) wages have been declining at the highest rate in four decades.

The second problem is, if inflation remains so persistent, what reining it in could entail. The Federal Reserve has started raising interest rates in an effort to cool down the economy. They’re trying to do so gingerly, aiming for a “soft landing.” But if demand and investment end up plummeting in response, the US could face a painful recession.

"The American Rescue Plan was drafted with good intentions," Vox concludes, "but it caused real problems."

From @voxdotcom: 'Biden’s American Rescue Plan worsened inflation. The question is how much.' The answer is a lot. The president and his party bear significant responsibility for today's inflation. https://t.co/dfiXD0etvn pic.twitter.com/xHp1iU7DGj

What's more, Vox even cites data that debunks President Biden's claims, as recently as this week, that the COVID-19 pandemic and Russia's invasion of Ukraine were to blame — and that his policies had nothing to do with it:

Inflation has been happening across the world, caused by pandemic-related disruptions, and exacerbated this year by Russia’s invasion of Ukraine and China’s Covid-19 lockdowns. Even before the American Rescue Plan passed, “the seeds for a high-inflation environment were already planted,” said Marc Goldwein of the Committee for a Responsible Federal Budget.

But regarding the exact amount of inflation, the US stands out. And it started to stand out shortly after President Biden took office.

And there it is. Democrats, according to Vox, "wrongly concluded that a stimulus far in excess of what models said was necessary was the less risky option" because they believed "they were still in the 'money printer go brrr' era, where there was less pressure to be judicious about where that money was going — so instead of targeting help to those who needed it, they sent hundreds of billions of dollars to well-off Americans and states doing just fine, for political reasons."

Recommended
Biden Said His Plan Would Lower Gas Prices...Not So Much.
Spencer Brown

As Biden and his party barrel toward November's midterms with little more than an infrastructure bill and the American Rescue Plan to make the case for why Democrats should be kept in power on Capitol Hill, Vox reads the writing on the wall: If Democrats don't turn things around for the economy this year or especially before 2024, they'll face electoral consequences and the Democrats' politically-motivated spending binge will not have been worth it.