Joy Behar Issues Threat Over Abortion...And This One We're Okay With 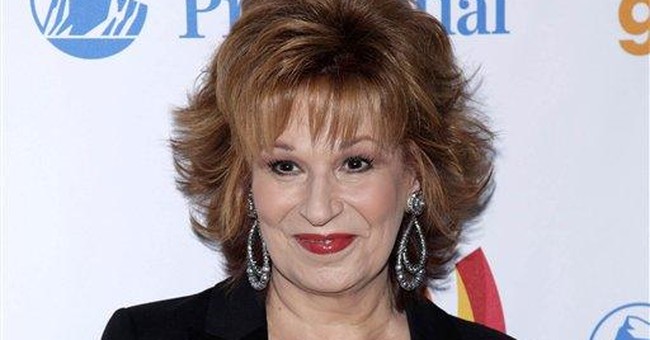 Democrats and the left have been coming unglued in recent days over the prospect that a Supreme Court-invented constitutional right to abortion might be struck down and decisions on abortion limitations might be left up to — gasp — the citizens of each state.

In addition to threats of violence against originalist Justices on the Supreme Court and the usual inane protest signs, some liberals are taking things to the next level and threatening a "sex strike" in protest of the leaked Supreme Court draft that showed Roe being overturned which is...actually a great way to avoid having children if you don't want them.

Among those talking of a looming liberal sex strike is co-host of The View Joy Behar. As The Decider put it, "Joy Behar is taking the protest off the streets, and into the sheets." Hoo, boy.

Like Ketanji Brown Jackson, this writer is not a biologist. But at a sprightly 79 years old, it seems unlikely that Behar would be needing the services of her local Planned Parenthood.

Here's what Behar had to say about the apparent past effectiveness of sex strikes:

.@JoyVBehar: "In 2009, Kenyan women enforced a sex ban until political infighting ceased. Within one week, there was a stable government."

"We have more power than we think we have, and some of it could be right in the bedroom." pic.twitter.com/45t4T8P1Pv

She continued after her supposedly brave suggestion of a sex strike by warning viewers not to "think this is just a war on women" but "a war on people of color and gay people" because of course the only people who need abortion rights more than nearly-octogenarian women are gay people. You can't make it up.

The left is just resorting to all their woke social justice-y buzzwords that make no sense. In New York, Behar and her gays will still be legally able to get abortions, not that they need them, if voters and their scandal-prone Democrat leaders want to allow that.

In their frenzied outrage, liberals are missing the irony that their supposed protests and decision to take a break from their advocacy and embrace of hookup culture is what pro-life activists have been suggesting for literally years.