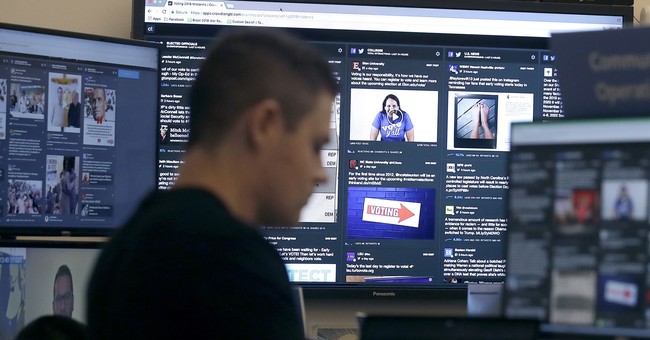 There's been much alarm-ringing from conservatives about the Department of Homeland Security's "Disinformation Governance Board," and now a Republican congressman is taking action to send what he hopes will be "a wakeup call" for the Biden administration following its latest controversial move.

"No Federal funds authorized to be appropriated or otherwise made available to the Secretary of Homeland Security may be made available for the establishment of a Disinformation Governance Board," Pfluger's bill states.

Speaking exclusively with Townhall about his bill while traveling between constituent town halls in the Big Country of Texas on Monday afternoon, Rep. Pfluger said it's his hope that "every American would be outraged by the thought that the government would be some sort of big brother figure fact-checking speech and being the arbiter of truth. I mean that's just insanity," he added saying he hopes his bill also "highlights" the error of the Biden administration's ways. "Unfortunately, when you have an executive order machine like the Biden administration has been, then yeah, we do have to do it," he said of the need for his simple but direct legislation.

Biden has made it "very, very clear," Pfluger added, that he sees "governing by executive fiat as the way to govern," and indeed the Biden administration has. From killing off American energy projects and extending eviction moratoriums to mandating vaccines and fighting to preserve a mask requirement for travelers, the Biden administration has tried — and often failed — to enact an agenda without Congress' assent.

"We have to remember that our Founders set up our Constitution in a way that had checks and balances, and one of those checks, one of those balances, was that the legislative branch would check the president — that is exactly what this is," Pfluger emphasized of his bill to prevent taxpayer dollars from going to the Department of Homeland Security's disinformation board.

"We don't need the 'fourth branch of government,' which some people refer to as the unelected bureaucrats, spending taxpayer money on a program that would limit free speech in the United States of America," Pfluger added.

Pfluger, whose district covers 29 counties in Texas, has seen firsthand the effects of another Biden administration failure — the border crisis. And the fact that the Department of Homeland Security is, after turning a blind eye to the border crisis and illegal immigration, now hyping up its effort to police Americans' speech is not lost on Pfluger.

"I think it's pretty clear that his priorities do not lie in the safety and security of the American public," Pfluger said of DHS Secretary Alejandro Mayorkas. "His priorities are grossly out of order," he reiterated before singling out Mayorkas' recent appearance before the Committee on Homeland Security, calling the DHS Secretary's testimony "shameful."

"He reported that the border is secure when we have a record number of people who match the terror watch list, criminals, gang members — and other people who would do our country harm — entering our country," Pfluger recalled of Mayorkas' eyebrow-raising testimony.

In Pfluger's view, Mayorkas — and others in the Biden administration — may be catalyzing more opposition against their agenda than for it with their handling of the border crisis and foray into policing speech. "It's very clear with Republicans, with independents, and now even with Democrats...who are jumping ship on the issue of border security trying to distance themselves away from the president," Pfluger explained. "I have multiple Democrats right now asking me to join them, or if they can join me, in some sort of border security legislation or if they can come visit the border. They realize that the president has completely abandoned any sort of sense of border security, especially in the state of Texas," Pfluger added.

It's the Biden administration's unpopularity and the rocky rollout of DHS' disinformation board that Pfluger is hoping might lead his Democrat colleagues to sign onto his legislation to defund the program. "If they believe in free speech and they believe in protecting the First Amendment — we shouldn't have to legislate this — I hope that we do have some Democrats who will join in, in pushing back on the administration's out of control approach toward governing."

Striking a tone that harkens back to a spirit of political cooperation that's been rare in recent years, Pfluger called on President Biden to put the Constitution ahead of his administration's power-grabbing aspirations. "I hope that in the same breath that I gave the Biden administration praise for bringing my constituent Trevor Reed home from Russia — who was unjustly and unlawfully held for 985 days — and I praised them for putting patriotism over politics, well now I also am demanding that the Biden administration put patriotism over politics," he said. He also called on Biden to "turn from these types of actions" and called on the administration "reverse course on their policies — specifically around the border and on the limitation of free speech," Pfluger added. "This is not what America's about. It's not what our Constitution affords us."