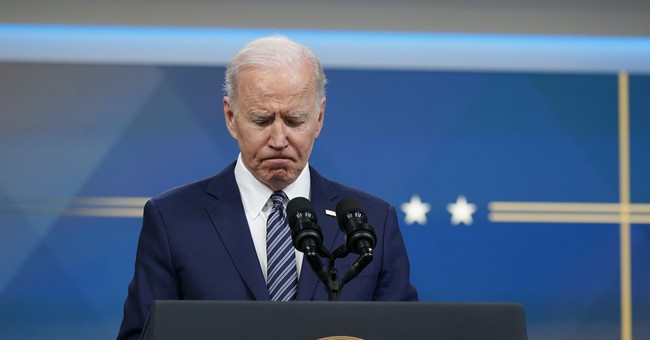 Most conservatives already know that a "good" week for President Joe Biden is just one with fewer crises or gaffes, but when even CNN can't spin Biden disasters into good news — you know things aren't going well. Such is the case again this week as CNN Editor-at-large Chris Cillizza's analysis explains "Joe Biden would probably like to forget the last few days." No kidding.

"They've been filled with confusing messages on critical topics, projecting an image of a directionless White House led by a President whose tendency for veer off message is only adding to his problems," Cillizza outlined in his piece. As Townhall reported, it appears the White House was caught complete off-guard by the federal judge's decision that struck down the Biden administration's mask mandate for travelers. Psaki's initial reaction was an uncertain one, then Biden said travelers' decision to mask or not was "up to them," before the CDC plunged ahead with an appeal of the judge's decision.

"The administration has a revolt on its hands over its previously announced decision to rescind Title 42," Cillizza noted as well. As Townhall's Julio Rosas has reported from the U.S.-Mexico border, conditions created by Biden's border crisis are about to get much worse, even as some within Biden's own party are urging him to delay or reverse its plans to end Title 42 as the midterm elections loom.

It's been a very bad few days for Joe Bidenhttps://t.co/N15dwW31Xj

On the topic of the midterms, Cillizza's CNN analysis also notes dissent in the Democrat ranks in the form of an op-ed by Senator Elizabeth Warren (D-MA) demanding Democrats in Congress go on offense, legislatively. "If we fail to use the months remaining before the elections to deliver more of our agenda, Democrats are heading toward big losses in the midterms," Warren wrote. Her apparently short view of history ignores the fact that the radical leftist Democrats have tried repeatedly to force their agenda through Congress, but have failed because not even all members of their own party will get on board to overcome GOP opposition in the split Senate and narrow Dem majority in the House.

And while Cillizza forgot to include the fact that Biden needed a literal Easter bunny to save him from reporters' questions during the White House Easter Egg Roll, he did note that this tumultuous week "comes as Biden is at or near his low ebb in terms of job approval during his term" at an underwater 39 percent approval, 55 percent disapproval according to CNN's latest average of the last four national polls.

"In short: Biden didn't have a lot of goodwill left with the public before this week," Cillizza recaps. "But the conflicting messages coming out of the White House — and the broader Democratic Party — make it look like there is no plan to turn things around in advance of the midterm elections, which are now just over 200 days off."

Putting a finer point on the sorry state of affairs within the Biden White House and the president's party at large, Cillizza reported that "It's all a mess for Democrats. And a mess without any clear — or easy — solutions."