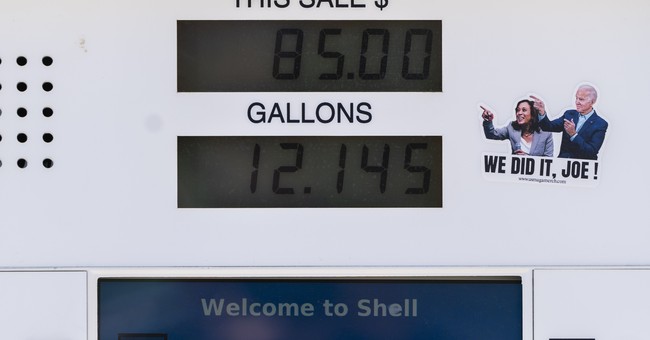 As usual, Biden's announcement was more about avoiding blame that explaining what his plan would do...because it won't do much.

BIDEN: "We saw today's inflation data. 70% of the increase in prices in March came from Putin's price hike in gasoline." pic.twitter.com/uGGctNdP6s

Biden's decision to use executive authority to have the Environmental Protection Agency (EPA) waive normal rules to allow grain-based ethanol mixtures of up to 15 percent in American gas supplies is, according to the White House, more action aimed at lowering gas prices Biden claims have skyrocketed due to Putin's invasion and greedy oil and gas CEOs. But there are more than a few problems with Biden's new plan.

First, the EPA typically restricts ethanol-rich fuel during the approaching summer months due to the increased pollution and smog its use causes. The U.S. Energy Information Administration notes that ethanol-gasoline mixtures "have higher evaporative emissions from fuel tanks and dispensing equipment" that "contribute to the formation of harmful, ground-level ozone and smog." So, Biden is ordering the EPA to abandon its mission to "to ensure that Americans have clean air" while cutting into America's food supply despite warnings of upcoming shortages.

Ethanol also has one-third less energy than unleaded gasoline, according to the U.S. Department of Energy, meaning cars burning the E15 mix get 4 to 5 percent fewer miles per gallon than the same vehicle would using regular gasoline. That means cars using E15 will burn more fuel to go the same distance and necessitate more frequent fill-ups.

What will Americans get in return for increased smog and ground-level ozone and fuel that gets them fewer miles per gallon? Savings of ten cents per gallon at around 2,300 gas stations where E15 is available, according to Biden administration officials. That's 2,300 out of the "more than 150,000 fueling stations across the United States" reported by the American Petroleum Institute. AAA reports the national average for a gallon of unleaded stood at $4.098 on Tuesday, up from $2.863 one year ago. So, with gas — on average — more than $1.20 more expensive since last year, Joe Biden will save a small fraction of the country's population ten cents per gallon. Biden's bragging of this new "action" is reminiscent of the White House touting a $0.16 savings on their Independence Day BBQs.

"Leave it to Joe Biden to encourage the burning of more food for fuel as a global food crisis approaches due to the war in Ukraine," remarked Steve Milloy, a Former Trump EPA Transition Team member and the founder of JunkScience.com. He also reinforced the point that "ethanol is less efficient than gasoline, reduces gas mileage, and so costs consumers more than conventional gasoline." Not exactly a built back better solution.

"The White House has argued that the use of E15 can shave 10 cents off each gallon of gasoline."

Worse, mileage is worse with ethanol, so you actually burn more gas.

Heartland Institute President James Taylor also emphasized the short-sightedness of the Biden administration's scramble to look busy with actions that won't improve the economy. "EPA is supposed to protect us from harmful pollution, not encourage it," Taylor said. "At the same time, burning food for fuel makes no sense at all when the Biden administration and others warn of widespread upcoming food shortages as a result of the Russian invasion of Ukraine."

While it remains to be seen whether consumers with access to the small percentage of American gas stations where the E15 gas blend is sold will even see the White House's touted ten-cent savings, more Americans are curious about what landed on President Biden's shoulder during his remarks:

White House reporters at the event — and even White House communications director Kate Bedingfield — insist that the little shoulder-splat was just an errant piece of corn that was apparently landing on multiple people attending the event, but people have their doubts.