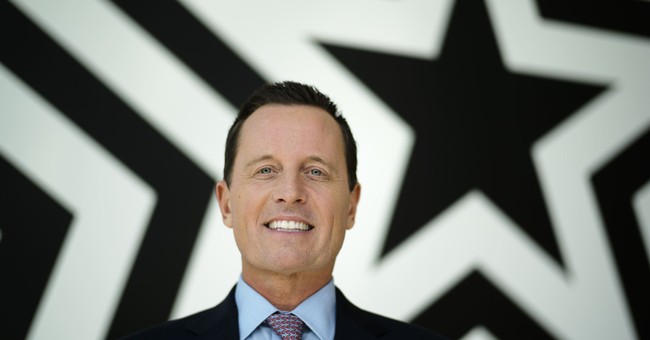 Ric Grenell, who served as U.S. Ambassador to Germany and Acting Director of National Intelligence in the Trump administration, found himself on Iran's list of sanctioned individuals this week. Grenell was joined by 24 other former Trump administration officials who were officially sanctioned due to what Iran calls “terrorist activity and human rights violations" — a rich claim for a leading state sponsor of terror to make.

As the first openly gay member of a presidential cabinet who also spearheaded the Trump administration's efforts to decriminalize homosexuality around the world — efforts he's continued through his work with OUTSpoken to launch OUTSpoken Middle East (OME) — Grenell tweeted that he is "proud" to be listed as a threat to Iran's dictatorial regime.

They aren’t bothered by @WaltDisneyCo, @hrc or any Gay Left activist.

It's not the first time that Grenell's international efforts to achieve a meaningful advancement of human rights (read: the opposite of failed presidential candidate Kirsten Gillibrand) have sent Iran's regime scrambling. According to a post by OME's correspondent in Tehran, Grenell's work to launch the platform led the Iranian state TV to accuse him of "enhancing his gay agenda in Muslim countries and spreading sodomy to lower the Muslim countries’ population."

Notably, the Iranian regime's sanctions for supposedly "gross violations of human rights" have excluded Democrats and woke leftists who talk a big game about equal rights for gay Americans but whose commitment to defending those rights around the world are lacking. As the Biden administration continues to prioritize its attempts to revive a nuclear deal over the human rights abuses and terror-sponsoring activities of Iran, White House officials have evaded sanctions even though Biden frequently touts his supposedly woke and inclusive administration.

What's more, as Grenell noted in his tweet, the Iranians also "aren't bothered" by what the Walt Disney Company, Human Rights Campaign, or other leftists in the U.S. do and say. Perhaps its because they don't actually pose a threat to Iran's stranglehold over its citizens? Disney has proven, as was the case with its live action remake of Mulan, that human rights outside the United States are of no concern to them. Similarly, HRC is not an organization committed to rights for marginalized people so much as it is a blunt object used to aid Democrats by attacking Republicans.

"I’m proud to be targeted by the Iranian Regime for standing up for the decriminalization of homosexuality," Grenell told Townhall. "I’ve always known that the gay Left’s phony campaigns to attack Florida or parents or to wear red ribbons to Hollywood events was never going to help gays and lesbians around the world who are threatened everyday to be put in prison or put to death in some cases," he added. "Consider the source."

As was seen clearly at the Oscars last month, Hollywood elites are giddy to mock Florida's new parental rights law — but when have they taken a stand for those in countries around the world where people are sentenced to death or murdered extrajudicially because of who they love? In Iran, for example, at least four gay men were publicly executed for their sexuality in the last year. When was the last time a CNN anchor called out the regime of Iran or other Middle Eastern country for treating their citizens like this?

Grenell and OUTSpoken Middle East have already done more than the Biden administration or mainstream media to actually expose the human rights abuses carried out by regimes in the region where, unlike what Chasten Buttigieg — the husband of Biden's transportation secretary — said about Florida, gay people are actually dying. Launched last November, OME's citizen journalists report from the ground in Kabul, Tehran, Damascus, and Istanbul — with more cities slated for expansion in the future. In addition to its online stories published in English, Farsi, and Arabic, OUTSpoken Middle East is preparing to broadcast a Farsi-language radio show twice per week over shortwave radio into Tehran, Iran and Kabul, Afghanistan.

According to OUTSpoken Middle East Editor Chadwick Moore, his "correspondents and their sources in Iran and Afghanistan couldn't be more outraged by the Biden Administration's actions in the region and the hypocrisy they see in Democrat and liberal American institutions." OME's reporters "continue to hit hard in their reporting at the Iranian regime and the human rights abuses there, particularly against women and LGBTs," he added. "Most of our writers and their sources in Iran are too young to remember the Iranian revolution of 1979, but social media and the Internet have awakened a new generation to what life could have been like, before the mullahs took over," Moore noted. "Still, Western liberal institutions ignore them."