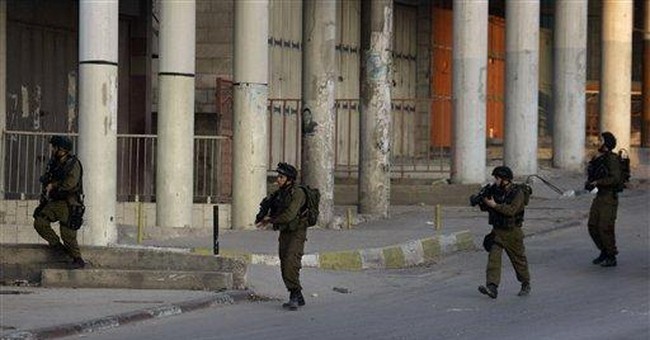 Amid a spate of deadly terrorist attacks on citizens in Tel Aviv and elsewhere in Israel over the past week, Palestinian rioters have also been targeting Jewish holy sites, including Joseph's Tomb in the West Bank which was ransacked by more than 100 Palestinians on Saturday evening and again attacked on Monday morning after two Israelis were shot attempting to visit the holy site.

According to The Jerusalem Post, the mob of rioters first descended on and laid siege to the holy site before being driven off by authorities in a Saturday night attack that included "setting fire to the site, damaging the gravestone, a chandelier hanging above it, a water tank and an electricity closet."

Avi Mayer of the American Jewish Committee shared photos from the vandals' assault on the religious site.

After throwing hundreds of rocks at the Jewish holy site, they burst in and ransacked the place, smashing the grave marker and setting fire to the tomb.

The images are simply shocking, as is the world's silence. pic.twitter.com/3yFXJjZx6Z

Prime Minister of Israel Naftali Bennett responded to the rioters' actions saying his country "will not accept this kind of an attack on a place that is holy to us, particularly on the eve of Passover" and pledged to "reach the rioters" and "rebuild what they destroyed, as we always do." In 2000, the holy site was partially destroyed by Palestinians, and it was again burned by Palestinian vandals in 2015.

Israel's Defense Minister Benny Gantz called the vandalism "a serious event and a grave violation of freedom of worship in one of the holiest places for every Jew. It violates the feelings of the entire Jewish nation, especially when it occurs during the Muslim holy month," Gantz added. He also called for "the immediate reinforcement of... officials on-site and decisive action against rioters and terrorists that harm stability and security in holy places."

Then early on Monday, news broke that the site was again vandalized by Palestinians and two Israelis were shot after crossing through an unmanned checkpoint into the West Bank city of Nablus, where Joseph's Tomb lies, attempting to reach the site. The Jerusalem Post reports that the two victims were able to drive out of the West Bank and receive medical attention from IDF soldiers.

Previously, in April 2011, Palestinians shot several Israelis — killing one and wounding two others — near Joseph's Tomb. But this weekend's attack was not the only one amid an escalation from Palestinian terrorists seeking to attack Israeli targets. Within 12 hours of the first attack on Joseph's Tomb, a Palestinian stabbed an Israeli border officer at another holy site, the Tomb of the Patriarchs.

In another Tweet, Mayer highlighted the double-standard that exists in the media's coverage of, and international reaction to, instances of Palestinian violence. "If, God forbid, a mob of Israeli Jews had destroyed a major Muslim holy site, it would make headlines around the world and there would be angry protests in major cities across the globe," Mayer noted. "Is there a single non-Israeli media outlet that has covered this?"

If, God forbid, a mob of Israeli Jews had destroyed a major Muslim holy site, it would make headlines around the world and there would be angry protests in major cities across the globe.

Is there a single non-Israeli media outlet that has covered this? https://t.co/8GRDZpXOwh