'We Just Stumble from One Crisis to Another': Hawley Blasts Biden's Failed Foreign Policy 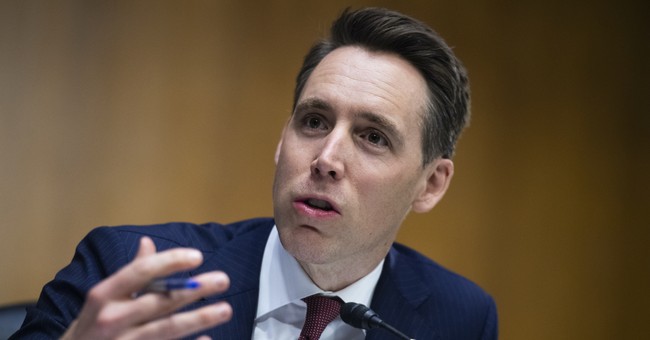 Americans know that President Biden's performance on the world stage over the past 15 or so months has been one botched attempt at leadership after another. All one had to do was watch what Biden did, then see the results play out in real time as America's allies reacted with formal censures of Biden, recalling ambassadors, and criticizing his actions in official speeches and statements.

Republican Senator Josh Hawley of Missouri took to the Senate floor this week to highlight how bad Biden's failed foreign policy has been since taking office last January.

Beginning with the most recent foreign fracus, Hawley reminded that when "Joe Biden came to office, the people of Ukraine asked for military assistance – a year ago. Did he give it to them?" Hawley asked rhetorically.  "No. He denied them military assistance. He denied them lethal aid," he said, pointing out the inconsistency in Biden's attitude and actions toward Ukraine.

"What did he do for Vladimir Putin?" Hawley also asked. "When he came to office he green-lighted Vladimir Putin’s pipeline. He turned their pipelines on, he turned our pipelines off," Hawley reminded. "What did he do with American energy production? He throttled it down. He turned it off…On one issue after another when it comes to Ukraine, this President has been wrong... the White House shouldn't point fingers and shift the blame,” Hawley noted.

The Missouri Senator also reminded "where these foreign policy disasters really kicked off in a big way — that was in Afghanistan. And am I concerned about Afghanistan? You’re darn right I am," he said. "13 service members were killed at Abbey Gate — has anyone been held accountable yet for Afghanistan?" Hawley asked. "Has somebody been fired? Has somebody been relieved of command? Nope," he said in answer to his questions.

In response to Hawley's recap of Biden's failures of foreign policy, Hawaii Democrat Senator Brian Schatz failed to offer evidence to rebut what Hawley had reminded the Senate of, and instead talked about the events of January 6th in a rant that would have been at home on CNN or MSNBC.

He also criticized Hawley for being "mad about something that happened six months ago in a different part of the world," Schatz's apparent attempt at an Ilhan Omar-esque "some people did something" on 9/11 to describe Biden's botched withdrawal that saw 13 American soldiers killed along with hundreds of innocent Afghans.