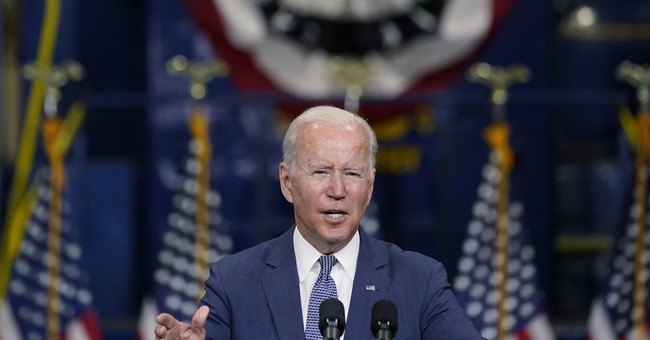 As the mainstream media's flawed coverage of Florida's latest parental rights law has demonstrated, Democrats and the media have reached a fever pitch in their hyperbolic outrage over provisions in the bill that don't even exist, and the Biden administration is no exception.

President Biden called the law "hateful." Transportation Secretary Pete Buttigieg said it was "harmful," and his husband Chasten went a step further to say the law would "kill kids." Biden's press secretary Jen Psaki stated in a briefing this week that Biden views Florida's HB 1557 as "a reflection of politicians in Florida propagating misinformed, hateful policies that do absolutely nothing to address the real issues" and slammed it as "a politically-charged, harsh law that is putting parents and LGBTQ+ in a very difficult, heartbreaking circumstance."

President Biden and his administration's attempt at woker-than-thou virtue signaling, though, is not backed up by Biden's record.

Like many policy areas in which Biden (and other Democrats) has supposedly evolved — read: flip-flopped — Biden's embrace of the left's woke social justice agenda is only a recent development in his lengthy career. And while Florida's bill does not actually include a "don't say gay" provision, then-Senator Biden once voted "aye" on an amendment to a school funding bill that would have stripped education agencies of federal dollars for saying, teaching, or referring a student to an organization that encourages "homosexuality as a positive lifestyle alternative."

A video posted to Twitter shows the scene that unfolded on the Senate floor in 1994 as senators considered an amendment that stated "no local educational agency that receives funds under this act shall implement or carry out a program or activity that has either the purpose or effect of encouraging homosexuality as a positive lifestyle alternative."

Everyone on Twitter is yelling about groomers and I'm over here like "remember when Joe Biden voted for an *actual* don't say gay bill?" pic.twitter.com/gpfunoL0Vb

The video also shows senators explaining that the prohibition included "the distribution of instructional materials, instruction, counseling, and other services on school grounds or referral of a pupil to an organization that affirms homosexual lifestyles." That is, an amendment that does way more than Florida's law that only prohibits "classroom instruction on sexual orientation or gender identity in kindergarten through 3rd grade."

Despite his stated position today, Biden voted "aye" on the amendment before the Senate.

While consistency isn’t necessarily the hallmark of lifelong politicians like Biden, it’s worth noting this 1994 vote for two reasons. First, to demonstrate just how far the Democratic Phas evolved on cultural questions in the two decades since, but second, to highlight just how far Biden actually exists outside of his positioning on the campaign trail as a moderate.

From his support for repealing the prohibition on federal funding for abortion – a policy he routinely supported while in the Senate – to forcing nuns to buy birth control and charging his Department of Justice to “do everything in its power to stop the rash of state laws that . . . violate the constitutional right to an abortion,” Biden has emerged as a willing handmaiden to the progressive jihad in the culture wars.

So back in 1994, Biden was pushing for something of a federal version of "don't say gay," something he and his administration now a generation later says amounts to "hateful," "politically charged," and "harmful." It's just another example of how Biden — throughout his career — has proven his standards are only as deep as poll numbers and public perception. If Biden has a sincere explanation for how his views changed since 1994, that would be one thing. But for him to pretend he's been a woke culture warrior for his entire decades-long career is just more bloviating from the man who can barely remember who his own vice president is.

Dems Feel the Agony of Defeat – and It's Awesome
Townhall
Rep. Lauren Boebert informs Rep. Eric Swalwell that no, he can't date her
Twitchy
Heartbreak at MSNBC as Joy Reid's 'ReidOut' Crashes and Burns in Ratings Wars
Redstate
What's Going On with the Highland Park Killer's Parents?
PJ Media