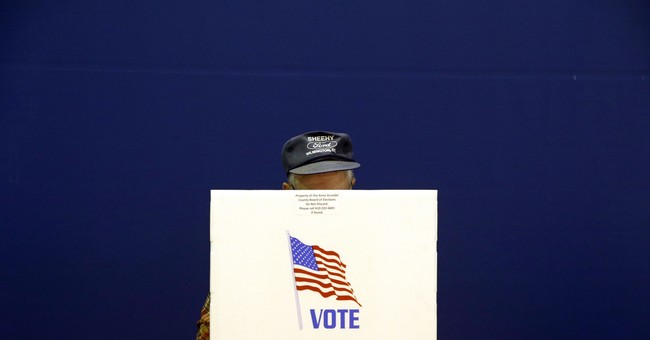 As Americans watched President Biden's first State of the Union address Tuesday night — a failed attempt at launching a "reset" for his administration and setting his party up for victories in November's midterms — there were two other bad-for-Dems stories playing out in Texas as the Lone Star State held primary elections.

First, a repudiation of Democrat claims that election integrity laws would result in lower voter turnout. On Tuesday night, voter turnout was higher than it was in the last midterm cycle — a very inconvenient truth for Dems who spent months claiming the recently enacted election integrity law would disenfranchise voters. But ensuring a secure election didn't suppress voters, if anything it gave Texans more confidence that their vote would count, more motivation to cast a ballot.

In 2018, there were roughly 2.6 million votes cast. In 2022, that number increased to more than 2.9 million. More Americans participating in the democratic process, especially in a primary race, is great news for our country. Even better, polling places cited fewer issues processing votes. Just as conservative proponents of the election security measure promised, it seems it was easier to vote and harder to cheat as Texans turned out in greater numbers.

The doom-and-gloom predictions about the election integrity bill from Texas Dems hit a fever pitch when the state's Democrat legislators jumped on planes last year and fled to Washington, D.C., bringing a COVID outbreak with them, where they were hailed as heroes for not doing their job. Even as recently as this week, Democrats such as "Beto" O'Rourke were fear-mongering about the election integrity law and saying Republicans wanted to prevent votes from being cast. Unsurprisingly, Beto was wrong and conservatives were right.

And Sawyer Hackett, the fittingly named hack who started the whip-gate hoax about border agents in Texas, couldn't resist peddling more lies on Twitter. Claiming the primary was a "testing ground" for "GOP voter suppression" he predicted that there would be "dismal turnout" as a feature of the state's new election integrity law. He couldn't have been more wrong.

Just a reminder that Texas’s primaries are tonight—two months ahead of any other state—because Texas is a testing ground for every form of GOP voter suppression.

An early primary with dismal turnout is a feature, not a bug, of the system.

Texas' success at safeguarding its elections while expanding opportunities for secure voting follows a similar story in Georgia where Democrats like Stacey Abrams spent months accusing Republicans of trying to suppress voters only to find that Peach State voters turned out in greater numbers and fewer issues were reported at polling places.

Texas and Georgia both offer a blueprint for other states to follow. If a state wants to turn out more voters and make their elections run more smoothly, election integrity is a must and Democrat fear-mongering should be brushed aside.

"How many more times are Democrats going to tell the same lie?" RNC Chairwoman Ronna McDaniel remarked to Townhall. "When states like Georgia and Texas pass smart election integrity legislation, they see higher turnout and fewer issues at the polls," she added. "It's not worth paying attention to Democrats and their corporate media allies who hyperventilate about made-up voter suppression — Republicans are busy doing actual work to improve our elections," McDaniel emphasized.

The second and potentially more concerning development for Democrats is where GOP turnout surged in the primary. In every congressional district that lies along the U.S.-Mexico border, more Republican voters cast ballots on Tuesday night than in the 2020 or 2018 primaries.

And as Guy highlighted, GOP turnout was strong state-wide with Governor Abbott's totals beating Beto's, a check on claims from Texas and national Democrats that Texas is on the brink of being a blue state.

The numbers from Tuesday's primary suggest that Republican voters are enthusiastic about their party's candidates and motivated to vote for them — even in a primary. And it's playing out where one of Biden's many crises is having a significant impact on daily life.

Contrary to the Biden administration's claims, the border is not secure — it's basically wide open and allowing deadly fentanyl to be smuggled in, human trafficking victims to be exploited, and previously deported illegal immigrant criminals to return to the United States. In addition, COVID and other contagious diseases are spread around border communities. Ranchers, families, and small businesses are terrorized by criminal enterprises. Yet the Biden administration refuses to even call it a crisis, and now Republicans have sent the signal that they are ready to register their discontent at the ballot box.