Future Lawyers Ask Georgetown 'Where Can We Cry?' 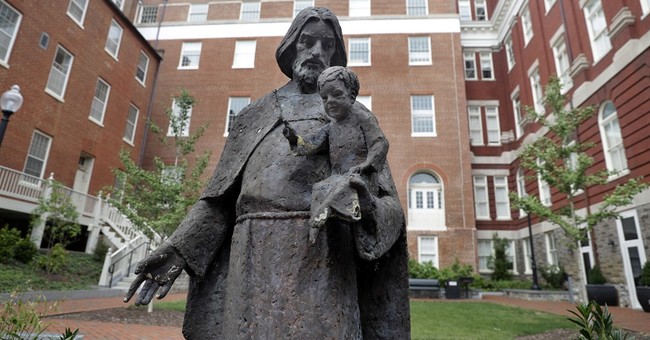 An intolerant gift that keeps on giving, Georgetown University students — who have apparently been triggered by the existence of a conservative faculty member's statement reiterating what polling has shown to be the dominant view among some 75 percent of Americans — have reached a new low of despair. So too, though, have the dean of the Georgetown University Law Center Bill Treanor and his associates.

As the situation unraveled on campus, liberal students circulated a petition calling for the firing of Ilya Shapiro who — until he was placed on leave Monday amid the firestorm of criticism from woke students over what was at worst a poorly worded tweet — served as executive director of the Georgetown Center for the Constitution.

Escalating their intolerance in response to administrators' fealty, shown through weak and biased emails to students, liberal snowflakes in the Black Law Students Association (BLSA) announced they'd hold a sit-in "to call for the immediate termination of Ilya Shapiro" on Tuesday. Claiming that placing Shapiro on administrative leave "is not enough," alleged adults and wannabe lawyers held their sit-in to force administrators to listen to their demands.

NRO's Nate Hochman tried to attend the sit-in but was denied by Georgetown security — but then he found a livestream of the event and was able to glean the lowlights of the state of affairs between students and administrators as the woke witch hunt continued.

Demands and questions issued to administrators during in the sit-in included "where can we cry?" In a video, the Georgetown University Law Center's Dean of Students Mitch Bailin offered a serious response for his wailin' students: "It is really hard to walk out of class or a meeting in tears, and you should always have a place on campus where you can go," Bailin said. "Reach out to me anytime and we will find you a space."

Excuse me, what? What person wants to have a lawyer someday representing them in court who previously needed a dedicated crying space due to tweets from others that upset them? What kind of conditioning / training / education is Georgetown Law Center providing? Will their graduates need a crying space available in the event a judge overrules their objection one day? Or their client is found guilty? Or someone testifies to a fact under oath that they find objectionable? It's ludicrous.

Mitch Bailin, GULC's dean of students, in response to the “where can we cry” query: “It is really hard to walk out of class or a meeting in tears, and you should always have a place on campus where you can go...reach out to me anytime—anytime—and we will find you space.” https://t.co/pxiyvpIkq4 pic.twitter.com/KquNfF2Dlf

Leftist students also sought "reparations" despite no actual harm or cost to them that wasn't their own making. Apparently the damage wasn't too great, though, as the students are apparently seeking just "a couple dinners or lunches," to which the dean responded "we have food on the way."

"Coming back to this reparations thing...I don't know if it's a couple dinners or lunches or what, but that would help us," one activist says.

"We have food on the way," the dean assures her.

As Hochman reported, administrators including GULC Dean Treanor who listened to student demands "echoed the language of the activists in the crowd, assuring the assembled students that he was 'appalled' by the 'painful' nature of Shapiro’s tweets and promising to 'listen,' 'learn' and ultimately 'do better.'" And even though Treanor and others administrators indulged the students' temper tantrum, the students still called the deans' comments "dishonest."

Apparently unsatisfied with the progress their stunt was making toward costing Shapiro his job, students suggested that Georgetown's Center for the Constitution be entirely defunded, which is a bit rich for students studying the law to demand. One student, as Hochman noted in NRO, objected to the originalist views the center has expressed: "'You can do as much diversity training as you want with staff,' she continued. 'But I feel like that Center has a certain ideology...so I really want you to defend why we really need it, beyond, like, you know, free speech, and beyond diversity of opinion. I really want us to think critically about why we still need it.'"

Gee, why would a law school want to have a center focused on the United States Constitution? Baffling. Free speech? Meh. Diversity of opinion? Nobody wants that, according to the students protesting Shapiro, Georgetown's Constitution center, and seemingly the Constitution itself.

As Guy pointed out on Twitter, the proper reaction for administrators — allegedly the adults at Georgetown — would be an eye roll and a simple "no." Trying to appease intolerant wokesters blinded by their own self-righteousness is a fool's errand. By indulging their stunt, Georgetown administrators are only giving them more power with which to inflict their intolerance.

Adults should roll their eyes & say “no.” I don’t know if GU Law is run by adults anymore. https://t.co/Ssucc26PSl