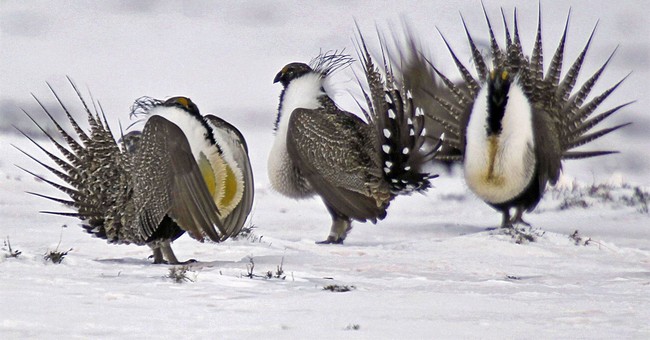 Every now and then, The New York Times makes itself useful by publishing in its pages a truly ludicrous-sounding article that is inadvertently a gift to conservatives. Enter the recent "science" section story about the "privilege" that exists in the animal world and how using the left's idea of "checking" or acknowledging the privilege that only belongs to some can be used to study animals.

But in discussing the use of privilege and its partner oppression to understand how certain animals seems to have more advantages than others, The Times seemingly inadvertently shows how differences within communities exist even where typical liberal factors simply don't exist.

According to the Gray Lady, some animals have signs of what, in humans, would be pointed out as proof of white privilege such as intergenerational wealth. No, really. Squirrels, for example, who leave stashes of acorns or other edible fauna for their offspring to make it through the winter. Not all of them, apparently, think ahead to ensure their smaller kin are able to survive, and so those for whom parents stockpile food are privileged, or something.

As The Times' argues, the privilege among animals is apparently wide-reaching:

Young red grouse are more likely to succeed in establishing their own territories when their fathers and other kin are nearby. Hyena daughters born to high-ranking mothers inherit their status, and get dibs on fresh meat. Some chimpanzees and capuchin monkeys crack nuts using stone tools that their parents used before them.

Animal wealth may be passed down to nonrelatives, too, as in paper wasps that take over shared nests or hermit crabs that seek better real estate.

But what of the left's idea of privilege and their complimentary theory of intersectionality that places individuals within compounding matrices of oppression based on factors including race, gender, and class that occur due to allegedly systemic injustices that must be righted, by force if necessary, to induce equity?

According to a handy guide included in The University of Southern California's School of Social Work, privilege (white privilege in this case) can be checked by "unpacking the invisible knapsack" that a person carries by considering some statements that include:

Answering "yes" to any of these proves privilege exists, according to the left. And, because "it is hard to disentangle aspects of unearned advantage which rest more on social class, economic class, race, religion, sex, and ethnic identity than on other factors," the only answer for the left is to pursue "systemic change" and to "redesign social systems."

But back to the animal world, are systems of oppression responsible for disparities among red grouse fathers? Status stratification that divides hyena mothers? Unequal attainment of basic tools among capuchin monkeys? Bigotry employed by paper wasps? Elitist hermit crabs forcing homogeneity within their crustacean neighborhoods?

Sure, some capuchins might have rocks around that are usable to smash food. Some squirrel parents may do a better job of stockpiling food for winter. Hyenas and many other animals follow a hierarchy of leadership where there's a leader in the pack. But those realities can't be attributed to oppressions inflicted by those that have more privilege due to systemic inequality — yet they exist.

One of the researchers quoted in The Times' story remarked that "it’s very exciting to study the rules of inequality in nonhuman animals," and that "to see this across so many different species was quite surprising."

Imagine that. Inequality among populations that aren't aware of or influenced by the left's theories of privilege and oppression. No differences in educational opportunity, race, income, sexual orientation, et al. to make some members more privileged through the oppression of others due to the factors normally considered in the left's pet theory of intersectionality that necessitates the radicals seize power and upend the system.

Just because one hyena, capuchin, hermit crab, grouse, or person has more resources or opportunity doesn't necessarily mean there's a systemic flaw that must be corrected. At times in world history, there has been. But most have been corrected so that these days, in the United States especially, people have more opportunity to make their lives what they want than ever before — regardless of any of the factors that underlie the left's obsession with identity.