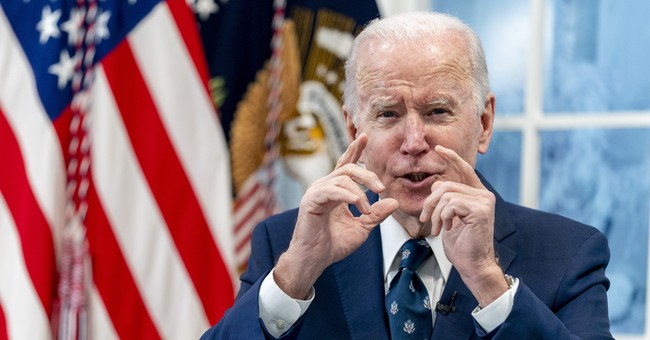 President Biden responded to Wednesday's report showing his administration's woeful handling of the economy with a statement that, again, failed to accept responsibility or offer any hope to Americans that "build back better" would do anything to improve the economy:

"Today’s report—which shows a meaningful reduction in headline inflation over last month, with gas prices and food prices falling—demonstrates that we are making progress in slowing the rate of price increases," Biden said, ignoring the fact that year-over-year inflation hit a 40-year high. "At the same time, this report underscores that we still have more work to do, with price increases still too high and squeezing family budgets," the president added.

"Inflation is a global challenge, appearing in virtually every developed nation as it emerges from the pandemic economic slump," Biden continued, attempting to suggest his leadership and policies are not to blame. "America is fortunate that we have one of the fastest growing economies—thanks in part to the American Rescue Plan—which enables us to address price increases and maintain strong, sustainable economic growth. That is my goal and I am focused on reaching it every day."

Wednesday morning's release of consumer price data for December shows that costs have soared seven percent in the previous 12 months, a level of inflation not seen since 1982. The dour news from the federal government's Bureau of Labor Statistics seems to confirm predictions of inflation continuing in 2022, bringing more bad news for Americans struggling to bounce back from the Wuhan coronavirus under President Biden's economic policies.

Consumer prices ?? SOARING ?? 7% in the last year. Inflation hotter than it’s been in nearly 40 years. Biggest jump since June 1982. This is a hardship for millions of Americans, not an inconvenience.

A release accompanying the BLS data explained that "Increases in the indexes for shelter and for used cars and trucks were the largest contributors to the seasonally adjusted all items increase" while "The food index also contributed" as Americans see grocery prices increase.

BLS added that along with more expensive used vehicles, shelter, and food, "the indexes for household furnishings and operations, apparel, new vehicles, and medical care all increased in December."

Inflation across the economy but excluding food and energy also saw an increase, the sixth time in the previous nine months that it increased by at least .5 percent month-over-month — another repudiation of the Biden administration's previous assurances that inflation was "transitory" and simply evidence that the economy was restarting thanks to Biden's policies.

In fact, BLS noted only "motor vehicle insurance" and "recreation" as costs where consumers saw prices decrease in December.

Consistently rising inflation has come as Democrats enjoy control of the White House and both chambers of Congress, a point not lost on Republicans looking to win majorities in the House and Senate in this year's midterm elections by highlighting the Biden administration and its Democrat allies in Congress that have failed to address — and even ignored — the pain being felt by Americans when they pay for common goods and services.

This trend isn’t “transitory,” and it’s all happening under Democrats’ one-party control. pic.twitter.com/GfEhPQ67xy

As with many of his stumbles, President Biden previously told reporters that runaway inflation was not a concern of his administration. In fact, back in July of 2020, Biden said that "There’s nobody suggesting there’s unchecked inflation on the way — no serious economist."

As Katie reported earlier this week, the inflation that's wiped out wage increases for many workers comes along with product shortages leaving grocery store shelves empty in American cities and a supply chain crisis that's received little more than lip service from the Biden administration.