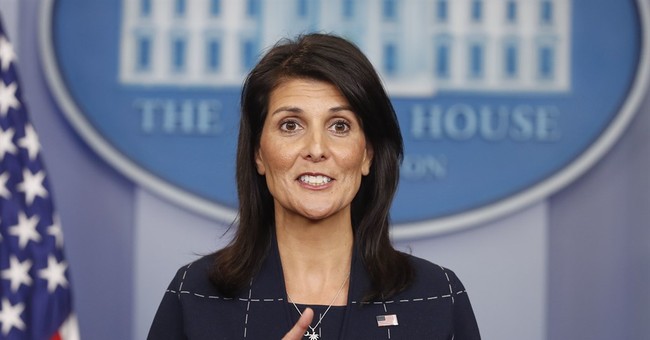 In the months since President Biden was inaugurated, his administration has bounced from one crisis to the next spanning domestic and international issues. There's rising inflation that's anything but "transitory," a broken supply chain, rising crime, and back-and-forth Wuhan coronavirus policies making life harder for Americans at home.

Abroad, Biden's chaotic and deadly withdrawal from Afghanistan shocked Americans and our allies. Foreign policy missteps caused our ally France to accuse Biden of betraying its friendship. And now with Russia amassing troops at its border with Ukraine, China ramping up its harassment of Taiwan, and Iran getting closer than ever to being a nuclear power, Americans are justified to have a lot of questions about how things went so wrong, so quickly.

For some answers, Townhall asked Nikki Haley, 116th Governor of South Carolina and 29th United States Ambassador to the United Nations (USUN), someone who took on many of the foes Biden is struggling to handle.

In the Middle East, Biden's attempt to revive the Iran nuclear deal has turned into political theater that allows Iran to continue work on its nuclear enrichment activities while giving the impression that they're negotiating toward a deal that would curb its nuclear ambitions. Even the Biden administration knows it's getting played, yet U.S. negotiators refuse to walk away — or even threaten to walk away — from the table.

“Iran's behavior under President Biden grows more dangerous by the day," Ambassador Haley told Townhall. "Meanwhile, Biden is desperate to get back into a terrible nuclear deal that would make us less safe," she added. "When Iran’s leaders chant 'death to America' and 'death to Israel' we should believe that’s what they want," Ambassador Haley noted. "Biden’s weakness toward Iran is a huge mistake.”

It's also a significant departure from how Ambassador Haley and President Trump tackled Middle East policy and negotiated to expand peace in the region and, despite warnings from political opponents, did not cause new conflicts to erupt.

“With the Abraham Accords, the Trump Administration did what no one had done before: brought Israel and several Arab countries to the table to unite behind the shared goals of peace, security, and fighting terrorism," recalled Ambassador Haley. "The Biden administration would be wise to build on what President Trump started," she added. "But, even if they don’t, they can’t reverse what a game changer this has been for the region.”

In Europe, where America's allies are still reeling from Biden's unilateral decision to withdraw from Afghanistan amid other diplomatic faux pas that angered some of our country's longest-standing allies, Biden continues to negotiate with U.S. foes from a position of weakness. “Joe Biden should never have agreed to give the Russians Nord Stream 2," Ambassador Haley said. "To attempt to use a reversal as a threat now is weak and embarrassing," she added after Biden's virtual meeting with Putin on Tuesday. "The damage is done.”

In addition to Russia, China continues to escalate its aggression against Taiwan, threatening "reunification" by force and conducting frequent incursions of Taiwan's Air Defense Identification Zone (ADIZ). That's in addition to China's genocide against religious minorities, use of forced labor, and smothering government censorship of free expression.

“Calling out Communist China’s genocide of the Uyghurs should not be a hard thing to do," remarked Ambassador Haley, referencing the Biden administration and Democrats' hesitancy to proceed with a bill preventing goods made with forced labor in China from coming to the U.S. "There is no excuse for stalling this bill," she said, adding "It’s insane that the Biden administration is lobbying members of Congress against human rights for the sake of John Kerry's climate agenda.”

Despite these challenges to President Biden and America's leadership on the world spanning the Middle East, Asia, and Europe, there are a few common threads Ambassador Haley noted in explaining why the world under Biden's leadership seems especially fraught.

“As UN Ambassador, I wasn’t concerned about other countries liking us," she said. "It was more important for them to respect us. We made sure they always knew what America stood for and what we were against," Ambassador Haley explained. "Under the Biden administration, those countries are now confused about where America stands and what she believes in... It comes across weak and that makes our enemies stronger and the world less safe.”

"When I was at the UN, we defended our right to put the U.S. embassy in Jerusalem, withdrew from the Iran Deal, put the toughest set of sanctions ever on North Korea, showed strength against Russia, defended human rights, and demanded other countries pay their fair share," Ambassador Haley said of her tenure as USUN. "But more than that, we changed the culture—including with how Israel was treated. Unfortunately, under the Biden Administration, the UN has gone back to being all talk and no action," she noted.

“The fact that the Biden administration rejoined the [United Nations Human Rights Council] flies in the face of everything we stand for as a nation," Ambassador Haley also noted. "It’s little more than a place for brutal dictators and rogue regimes like China, Venezuela, and Cuba to cover some of the world’s worst human rights violations. Rejoining the UNHRC isn’t just embarrassing; it’s dangerous."

Despite proposals, suggestions, and pleas from Republicans in Congress and elsewhere, President Biden continues to lead from behind at home and abroad, endangering America and her allies. The results have been plain for all to see — the disastrous and deadly Afghan airlift, Russia seemingly preparing to invade and capture Ukraine by force, China trampling human rights and threatening to take over Taiwan, and the Iranian regime marching toward nuclear capability.