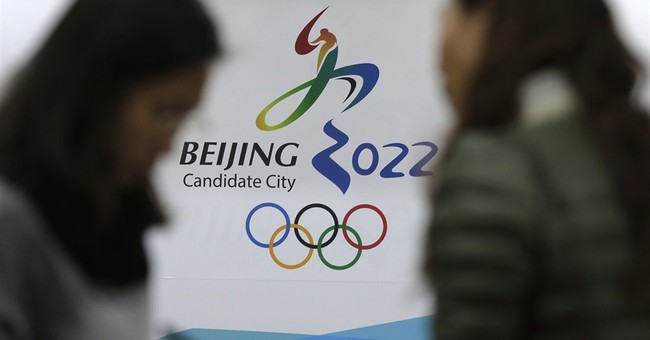 With roughly two months to go before athletes from around the world converge on Beijing to compete in the 2022 Winter Olympics, White House Press Secretary Jen Psaki confirmed earlier reports that the Biden administration will engage in a diplomatic boycott of the Winter Games.

Psaki explained that the Biden administration "will not send any diplomatic or official representation" to Beijing for the Winter Olympics and Paralympic Games "given the PRC's ongoing genocide and crimes against humanity in Xinjiang and other human rights abuses" that Psaki called "egregious."

Jen Psaki confirms that the United States will engage in a diplomatic boycott of the Beijing Olympics. pic.twitter.com/ifzZ90C2ev

A diplomatic boycott means that American athletes can still compete in Beijing, but no official U.S. delegation will attend the games. "The athletes on Team USA have our full support," said Psaki, "we'll be behind them 100 percent as we cheer them on from home," but the Biden administration "will not be contributing to the fanfare of the games."

As a result of the news the United States government would not send an official delegation to the Beijing games, the Chinese Communist Party lashed out at the United States through Foreign Ministry spokesperson Zhao Lijian who said a diplomatic boycott would amount to an "outright political provocation" and would lead China's government to "take firm countermeasures." Without expounding on what countermeasures might be deployed, the CCP spokesperson suggested American officials had not been invited and called the boycott "purely wishful thinking and grandstanding."

A diplomatic boycott of the Beijing Olympics is a joke. China doesn’t care if Biden and Team show up. They want our athletes.

Ambassador Haley's sentiment was shared by Republicans on Capitol Hill who were vocal opponents of participating in the Beijing Olympics including Rep. Michael Waltz (R-FL).

A diplomatic boycott of the Beijing Olympics doesn’t go far enough. It’s disgraceful U.S. companies will rake in millions off the Olympics while whitewashing an ongoing genocide and other atrocities in China. @cocacola @ProcterGamble @Airbnb @nbc

And of course, there's President Biden's own (confusing) words about China that reinforce his nickname "Beijing Biden" and suggest the diplomatic boycott of the Winter Olympics are little more than political theater aimed at looking strong against China but can't cover for his fealty to Chinese President Xi Jinping.

The diplomatic boycott is nothing but political theater. We know where Joe stands on China . . .pic.twitter.com/WGPBv2vfgN