Fauci Claims He Can 'Take Criticism'...While Whining About Criticism 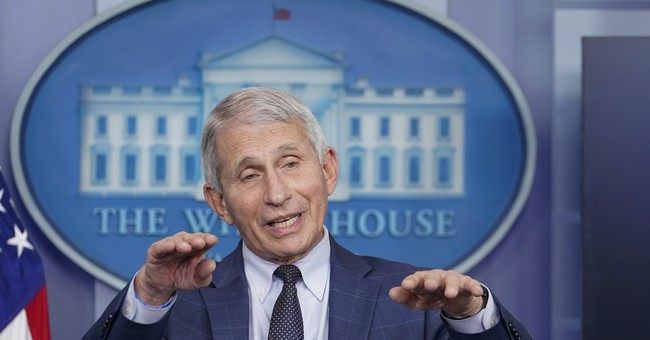 After months of rejecting invitations from Fox News Channel and Fox Business Network, Dr. Anthony Fauci joined Neil Cavuto on Friday afternoon to face questions about the Omicron variant and the Biden administration's handling of the pandemic that the president promised he'd "shut down." Clearly, that's not gone well.

When asked about his assertion "attacks on me, quite frankly, are attacks on science," Fauci claimed he "wasn't being pejorative to anyone" and insisted he "can take criticism." Right.

Trying to explain, Fauci continued that "the only thing I'm saying is that it's important for people to get vaccinated because — as a scientist, and a physician, and a public health person — I mean it's very, very clear the extraordinary benefit of vaccines to protect you against infection, to protect you against severe disease, hospitalization, and death."

FAUCI: "All I’m doing is talking science. So when you’re coming at me with bullets and slings...what is it that you’re criticizing?...You have to come to the conclusion that they’re criticizing the scientific principle." pic.twitter.com/SB47OTneKl

Fauci added more, saying "we also know that masks work — there are many many studies now that talk about and actually prove the important preventive capability of masking — and for that, I'm getting criticized by so many different sectors that are putting ad hominems against me," Fauci whined.

"All I'm doing is talking science," Fauci said. "So when you're coming at me with bullets and slings, I mean, what is it that you're criticizing? You're criticizing what I'm saying, and what I'm saying is public health-based and science-based. So that's what I meant," Fauci added trying to brush off new criticism of his response to past criticism. "You have to come to the conclusion that they're criticizing the scientific principles," he added.

Well, no — that isn't the conclusion at which you have to arrive. If Fauci had only presented and talked about scientific data and clinical studies, he might be able to hide behind that veil. But he hasn't. As Townhall reported and most Americans are now familiar with, Fauci has not kept himself within the bounds of science. As Guy reported, "Fauci's problem is that he has not always made public statements that are 'fundamentally based on science,' by his own admission."

In his answer to another question from Cavuto, Fauci correctly — but out of line with the Biden administration's party line — referred to the initial outbreak of the virus as the "ancestral or Wuhan strain."

WATCH: Dr. Fauci refers to the original virus as the "Wuhan strain" pic.twitter.com/CTH6NU0XyP

But wait a minute. Wasn't it then-President Trump's referencing of the origins of the virus as being Wuhan, China, that were deemed unforgivably xenophobic by then-candidate Biden? The same rationale that Press Secretary Jen Psaki used to explain why President Trump's travel restrictions were irredeemably racist but Biden's were fine? Of course. Because — once again — if Democrats didn't have double standards, they'd have no standards at all.