'I Don't Have to Make White Kids Feel Bad for Being White': Condoleezza Rice Blasts CRT on 'The View' 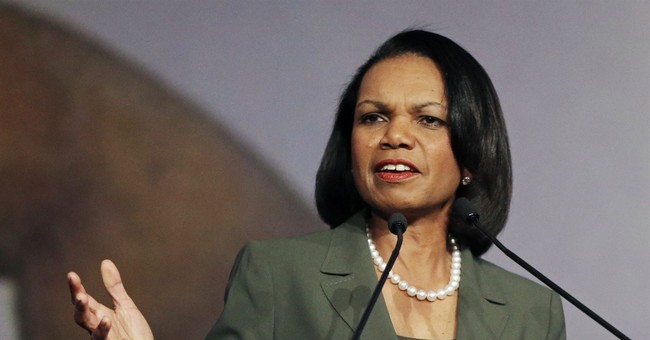 The View and its long-time hosts are not known for being hospitable to conservative views or even anything that deviates from liberal orthodoxy. Nevertheless, former Secretary of State Condoleezza Rice waded into the cesspool that is The View to deliver the truth about what's wrong with Critical Race Theory and the left's approach to race.

"I come out of an academic institution, and this is something that academics debate — what is the role of race and so forth," Rice noted before reminding the audience and ladies of The View that hers is a story of the American dream and not one without its own challenges due to race.

"Let me be very clear: I grew up in segregated Birmingham, Alabama. I couldn't go to a movie theater or to a restaurant with my parents. I went to segregated schools 'til we moved to Denver," Rice said.

"My parents never thought I was going to grow up in a world without prejudice but they also told me, 'that's somebody else's problem not yours, you're going to overcome it and you are going to be anything you want to be.' That's the message that I think we ought to be sending to kids," Rice said to a smattering of uncomfortable applause from the audience.

Rice is, of course, correct. Students, especially those in younger grades, shouldn't be burdened with the weight of all America's or the world's history. That's not to say that they shouldn't learn history — if anything America's students should be learning more about all of America's history in age-appropriate lessons. But, as Rice proceeded to point out, Critical Race Theory means that students, both black and white, are being taught that they're either bad or unable to achieve their dreams simply based on the color of their skin.

"One of the worries that I have about the way that we're talking about race is that it either seems so big that somehow white people now have to feel guilty for everything that happened in the past — I don't think that's very productive — or black people have to feel disempowered by race," Rice said of the current Critical Race Theory orthodoxy.

"I would like black kids to be completely empowered, to know that they are beautiful in their blackness, Rice added, "but in order to do that I don't have to make white kids feel bad for being white."

After some of the usual blather from the ladies of The View, including an accusation from Sunny Hostin that opponents of Critical Race Theory "want to hide history," to which Rice objected. "Parents don't want children to learn about the real history," Hostin said doubling down.

"It goes back to how we teach the history," Rice said pushing back against CRT's curriculum and methods. "What we don't do is make seven and ten-year-olds feel that they are somehow bad people because of the color of their skin. We've been through that, and we don't need to do that again."

Joy Behar then chimed in, claiming "That doesn't seem to be part of the plan."

"Oh it is part of the plan," Rice pushed back.

Rice's last argument cuts to the real intent of the left's push to institutionalize Critical Race Theory — not to unite Americans under the equality that our country continues to strive for, one where all enjoy equality of opportunity, but to divide Americans based on the color of their skin. In the mad world created by CRT, certain people must be shamed and made to feel bad, they say, in order for others to feel equal. In doing so, CRT only creates more inequality.

"It goes back to how we teach the history. We teach the good and we teach the bad of history. But what we don't do is make seven and ten-year-olds feel that they are somehow bad people because of the color of their skin."