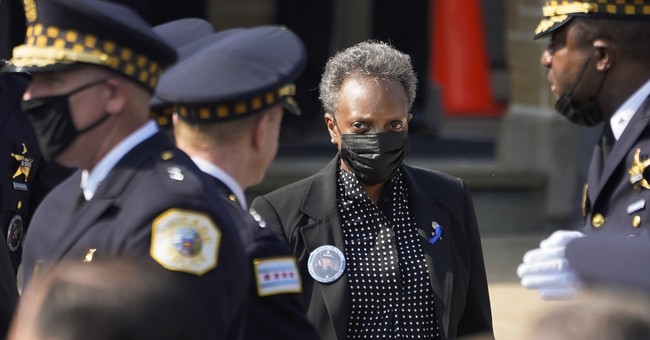 In Chicago, as in many other cities and states across the country, public employees have been told by officials that they must get vaccinated against the Wuhan coronavirus or face losing their jobs and/or income.

Included in Chicago Mayor Lori Lightfoot's mandate is the city's police force, but the union president representing them is calling for officers to defy the requirement to submit their vaccination status to the city of by midnight Friday. City employees — including police officers — who do not attest to their vaccine status by the deadline will be placed on unpaid leave unless Lightfoot alters her mandate.

The @FOP7Chicago is packed with Chicago cops as the union leadership holds a meeting to discuss opposition to the city’s vaccine mandate. All Chicago employees— including cops — have until Friday to be vaccinated or be placed on “no pay” status. @WGNNews pic.twitter.com/a9a236d0LK

"It's safe to say the city of Chicago will have a police force at 50 percent or less for this weekend coming up," warned Chicago Fraternal Order of Police (FOP) President John Catanzara in a video message ahead of Lightfoot's vaccine deadline. "That is not because of the FOP," he added. "That is 100 percent because of the mayor's unwillingness to budge from her hard line. Whatever happens because of that manpower issue, that falls at the mayor's doorstep."

"I have made my status very clear as far as the vaccine, but I do not believe the city has the authority to mandate that to anybody," Catanzara noted in criticising Mayor Lightfoot's mandate requiring employees' vaccine status be submitted through a city portal to continue working. "Do not fall for it," he told officers. "Hold the line."

In addition to the immediate refusal to comply Catanzara called for, he also warned of reports being filed with labor officials and a class-action grievance for those officers who are placed on unpaid leave for their refusal to comply with Lightfoot's mandate.

CHICAGO – The head of the Chicago police union says he will fight the city’s vaccine mandate in court. #DoNotComply pic.twitter.com/22ZkgR8g8p

Some in Chicago have called for a delay in the vaccine mandate over fears of what could happen in Chicago if half the city's police force is sidelined amid a year in which violent crime is already spiking.

Trying to win her game of chicken with Chicago police, Mayor Lightfoot claims that her city will be protected even after officers are sidelined by her mandate, but not all of Chicago's elected leaders are so sure. One predicted "pure melee."

The mayor says Chicago will be protected this weekend, even if half of the city’s police force is placed on no-pay status for refusing to report their vaccine status. One City Council member, however, predicted “pure melee.” https://t.co/ziB3gqIDsT