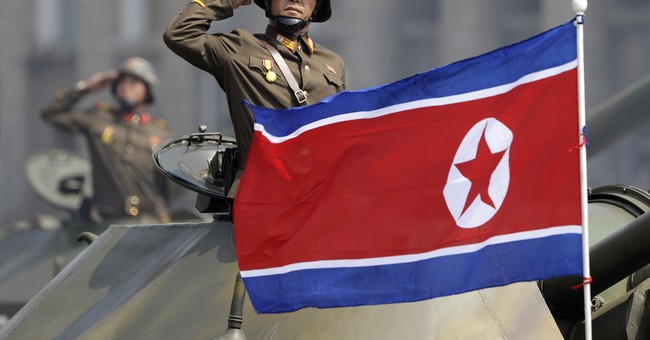 With flagging favorability and job approval at home in the United States, President Joe Biden's leadership troubles are also being noticed by America's adversaries abroad. Following the Biden administration's humiliating withdrawal from Afghanistan that caught longtime allies off-guard and the dust-up with France over Biden's new nuclear submarine deal with Australia, it's clear he's struggling to handle the many issues facing his administration just over nine months into its tenure.

As a result, those who may have previously been intimidated into complying with restrictions on their aggression are taking advantage of a beaten-down Biden to ramp up their weapons programs, and North Korea is no exception.

The Associated Press reported Thursday that North Korea tested yet another weapons system, this time an anti-aircraft missile, bringing its total number of launches in September to four.

SEOUL, South Korea (AP) — North Korea says it has test-fired an anti-aircraft missile in the fourth round of weapons launches this month.

The totalitarian regime test fired a ballistic missile into the Sea of Japan while its delegation addressed the United Nations General Assembly, and has also tested a hypersonic missile and a cruise missile capable of carrying a nuclear weapon in recent weeks.

North Korea fired a missile toward the sea off its east coast and accused the U.S. and South Korea of 'double standards' https://t.co/CPzxrYEMgN pic.twitter.com/fSiyY4lHbO

North Korea maintains that no one can "deny the right" of a nuclear-armed country to test its weapons as its ambitions go essentially unchecked by the Biden administration.

The Washington Post reported that South Korea is urging President Biden to do more to address North Korea's weapons ambitions and warning the world that the regime is using Biden's inaction to ramp up its missile and nuclear capabilities:

South Korean Foreign Minister Chung Eui-yong is calling on the U.S. government to detail more specific incentives it might offer North Korea in face-to-face negotiations, warning the Biden administration that Pyongyang is using the long-stalled talks to improve its missile and nuclear capabilities.

“If we let the status quo continue, it will lead to the strengthening of North Korean missile capabilities,” Chung said during an interview at the South Korean mission to the United Nations in New York. “We are very concerned about it.”

As Townhall reported previously, North Korea's regime has been taking advantage of a distracted and diminished President Biden for months. In August, the International Atomic Energy Agency issued a report showing an experimental nuclear power plant and radiochemical laboratory in Yongbyon — about 65 miles north of Pyongyang — that showed signs of reactivation after a period of dormancy.

The latest weapons test by North Korea comes as the United Nations Security Council gathers Friday to meet about the regime's other recent tests.