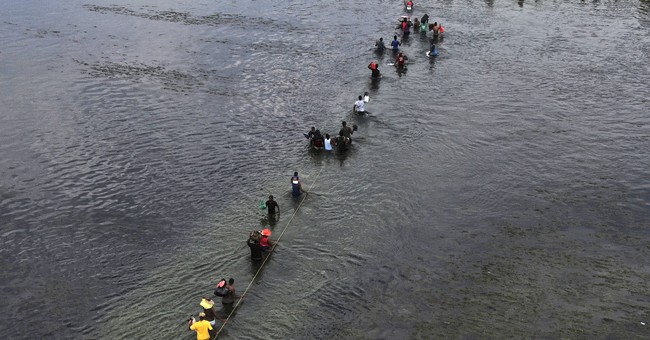 Everyone knows the Biden administration's handling of the illegal immigration crisis at the southern border is a disaster. It's a national security, health, and humanitarian disaster that continues to be ignored by President Biden, Border Czar/Vice President Kamala Harris, and the rest of the administration.

The alleged point man heading up border security, DHS Secretary Alejandro Mayorkas, will say privately that the situation at the U.S.-Mexico border is a crisis, but refuses to say so publicly.

In recent days as the illegal immigration and border crisis in Del Rio, Texas, grew to include a catastrophic 15,000 illegal migrants setting up camp under the International Bridge, Mayorkas has failed to lead — as has the rest of the Biden administration.

Yep, while the border has been basically removed as a barrier to entry to the United States, the Department of Homeland Security is focused on climate change. It's a move that makes sense only if you adopt the Biden administration's belief that climate change is the greatest threat the United States faces. Not illegal immigration, not terrorists emboldened by Biden's humiliating withdrawal from Afghanistan and botched drone strike that killed ten innocent civilians, climate change.

"I am proud to announce the first-ever DHS prize competition series focused on combatting the climate crisis," Mayorkas said in the announcement. "Through this competition, DHS will increase access to tools that help communities increase their resilience and address the existential threat of climate change."

Yes, Mayorkas believes climate change is an "existential threat," but won't admit publicly that the situation along the U.S.-Mexico border is a "crisis." It's equal parts maddening and laughable.

The first competition will be a "cooling solutions challenge" that will seek "to find new ways to better protect people at risk of heat-related illness or death during extreme heat events or in connection with other disasters." The challenge will allow DHS to "further increase equity in its disaster preparedness and response efforts as underserved communities are disproportionately impacted by extreme heat," according to DHS.

The release continues by explaining that the competition hopes to encourage American innovators to "develop groundbreaking solutions for climate change-related hazards facing communities across our country." Winners will receive cash prizes from a "total pool of $195,000" for their "innovative solutions."

For those who may have forgotten, the Department of Homeland security has a lot more to worry about other than giving away prize money to people who come up with equity-driven solutions to climate change.

"The U.S. Department of Homeland Security (DHS) and its homeland security mission are born from the commitment and resolve of Americans across the United States in the wake of the September 11th attacks," explains the DHS website's "about" section. "In those darkest hours, we witnessed true heroism, self-sacrifice, and unified resolve against evil. We rallied together for our common defense, and we pledged to stand united against the threats attacking our great Nation, fellow Americans, and way of life."

But now, thanks to Biden and Mayorkas, instead of a "unified resolve against evil," DHS is focusing on hot summers. Burying its collective head in the sand and seeking to flip a string of negative narratives, the Biden administration is pointing to a boogeyman — climate change — to try and distract the American people from the crises that deserve the full focus of agencies such as DHS.