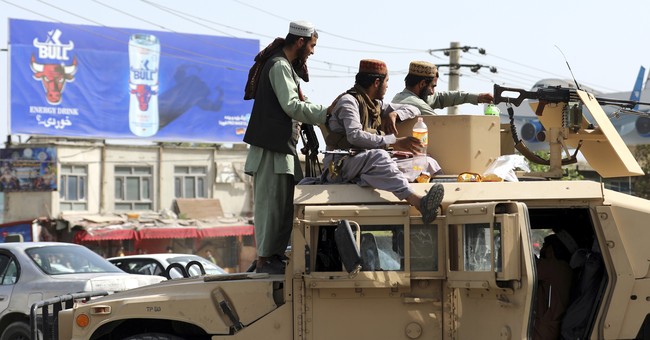 US Embassy in Kabul issues new security alert 8/21 telling Americans *not* to go to HKIA due to “security threats” outside the airport gates.

The alert’s “actions to take” include “follow the instructions of local authorities” which, in this case, would be… the Taliban? pic.twitter.com/MO5nGqhck9

Taylor said that the "airport remains secure" as of Saturday morning but that he was "not familiar" with the Kabul embassy's warning that came from his Biden administration colleagues at the State Department.

"There has been no reported change to the current enemy situation in and around the airport at this time," Taylor reiterated despite the embassy's warning.

Reporter asks about warning from U.S. Embassy in Kabul advising Americans not to go to airport. Maj. Gen. Hank Taylor is "not familiar with that." Tight ship. pic.twitter.com/Yc8XUFlXmE

Kirby also refused to comment on unconfirmed reports from French intelligence that there may be an ISIS element in Kabul.

Less than 24 hours after Biden claimed there were no threats at the Kabul airport, the state department warned Americans not to come to the airport because of unidentified threats. Not the Pentagon refuses to share what threats prompted that warning. pic.twitter.com/d08eKKUW0h

"We are continuing to process them and get them to safety," Taylor said of Americans, Special Immigrant Visa applicants, and Afghans deemed at risk who are able to make it to the airport gates.

"Our military forces at the gate have the ability to continue to process those who come to the gate," though Taylor clarified he was not telling Americans to come to the airport, avoiding a direct contradiction with State Department guidance.

Kirby again admitted that the Pentagon is aware "of a small number of cases" where Americans and Afghan allies "have been harassed and in some cases beaten" despite President Biden's assertion Friday that there was nothing to prevent Americans from getting to the airport in Kabul for evacuation.

Pentagon Press Sec John Kirby also confirms what SecDef told lawmakers yesterday, conflicting with POTUS comment -- acknowledging there are a "small number" of Americans who have been beaten, harassed by Taliban while trying to get to the airport. Kirby notes Afghans also harmed

"Most Americans who have their credentials with them are being allowed through the Taliban checkpoints and into the gate and onto the airfield," Kirby explained, adding it is "frustrating" that despite making American concerns known to the Taliban "not every Taliban fighter got the word" or is abiding by an agreement to allow safe passage for those trying to flee Afghanistan.

Amid the threat and apparent contradiction between the Pentagon and State Department views of the situation on the ground in Kabul outside the airport, Kirby refused to "speculate" about potential rescue operations to retrieve Americans or others stranded behind the Taliban checkpoints that surround HKIA.

According to Taylor, the number of U.S. troops in Kabul remains at approximately 5,800 and in the last 24 hours, six U.S. C-17s and 32 charter flights departed Hamid Karzai International Airport carrying roughly 3,800 American and Afghan evacuees. Three of those flights landed at Dulles International Airport outside of Washington, D.C., Taylor added.