Report Reveals Just How Much Biden Lied to Us on Afghanistan 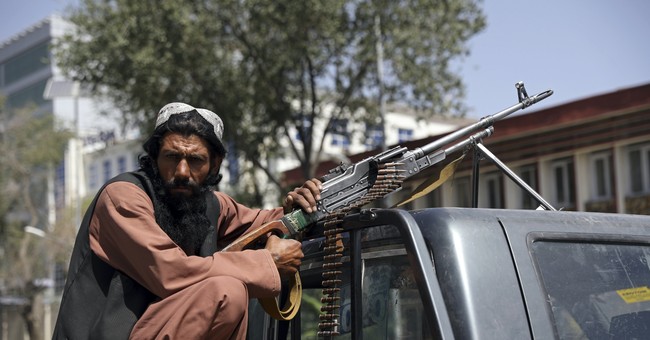 The Department of Defense Office of Inspector General released its quarterly Operation Freedom's Sentinel report to Congress on Tuesday, providing "background about events leading up to recent, significant and fast moving developments in Afghanistan."

The 98-page report reveals what the Pentagon knew about Afghan security forces' capabilities and the threats posed by the Taliban and other terrorist groups in the country. What it shows is that the Biden administration knew that the events of the last few weeks were not only possible but were likely to take place. The report is peppered with DIA intelligence and media reporting that showed the Afghan forces couldn't ward off Taliban aggression without U.S. and coalition support, yet the Biden administration responded with surprise as the Taliban took one provincial capital after another and last weekend arrived in Kabul.

As the IG report outlines, the Biden administration knew that the Afghan forces were unlikely to succeed in slowing or stopping the Taliban's advance, it knew the Taliban had its sights set on Kabul, and it knew that the Taliban was only engaged in political negotiations to seek legitimacy but planned to step up its military offensive to take the country by force. It also warned that plans for Kabul's Hamid Karzai International Airport were likely insufficient due to a complicated agreement with Turkish forces.

What Biden and his administration apparently didn't take seriously — as his public statements and those of his senior administration officials from the State Department to the Pentagon show — were reports from the U.S. Defense Intelligence Agency (DIA) that said Afghan forces "very likely will struggle" to stop or reverse Taliban advances. Intelligence that the Taliban was preparing for "large-scale offensives against provincial centers and complex attacks" on Afghan installations was also reported, apparently to no avail.

In Pentagon press briefings, Americans were told that the Afghan military — and specifically its air force — had every advantage, a line of messaging repeated by President Biden. But the IG report shows that they knew the Afghan Air Force was "stretched thin" and aircraft were "not receiving required maintenance."

The DIA reported that the Taliban has expanded its influence across Afghanistan after the withdrawal of coalition forces. Following the U.S. withdrawal, the Taliban will probably increase its use of large-scale military operations throughout the country as it grows more confident in its ability to defeat the Afghan government militarily. The DIA reported that the Taliban's strategy will likely focus on overrunning key provincial capitals to set the stage for a military takeover of Kabul. A reduction in U.S. offensive operations, specifically airstrikes and raids, has likely provided the Taliban greater freedom of movement and enabled it to broaden the scope of its military operations and make widespread territorial gains, according to the DIA.

The scenes the world watched at the airport in Kabul were also somewhat predictable given the lack of certainty over security reported by the IG. "At the end of this quarter, the coalition [consisting of U.S. and Turkey's military] had not determined whether keeping an enduring Turkish presence [at Hamid Karzai International Airport] would be possible or what that might entail," the IG report says. Not exactly the "we planned for every contingency" posture the Pentagon and State Department told the American people they'd established.

What's culminated this week in the Taliban's complete takeover of Afghanistan started with the Pentagon's transition to an over-the-horizon model of action, explains the IG report. As a result, the branch of ISIS operating in Afghanistan's Khorasan Province "exploited the political instability and rise in violence during the quarter by attacking minority sectarian targets and infrastructure to spread fear and highlight the Afghan government's inability to provide adequate security," explains the IG report. "Additionally, the Taliban continued to maintain its relationship with al-Qaeda, providing safe haven for the group in Afghanistan."

At the same time, Taliban fighters began their spring offensive by testing the resistance they'd face from Afghan security forces and found them easy to rout. This kicked off the Taliban's expansion of control "through a combination of military offensives, government retreats, and mediation with local officials while pursuing its long-term strategy of gaining influence in rural districts to then apply pressure to the population centers."

What America and the world watched, with equal parts sorrow and horror as America's nearly two-decade presence in Afghanistan collapsed in humiliating fashion, was forewarned. From the Taliban's game plan to the Afghan military's inability to push back to a lack of planning for transportation out of the country in the event such movement was needed, the Biden administration had information at their disposal. They evidently didn't find it compelling or use it to prepare Americans for what we've all now seen.

As for the future and what the Biden administration expects to accomplish once it finishes evacuating personnel at the end of August — that is, a prevention of future attacks against the United States from Afghan soil — the IG reports that if “left unmolested [al-Qaeda] are certainly going to rebuild, re-strengthen themselves, and we have no reason to doubt they…want to attack us in our homeland."