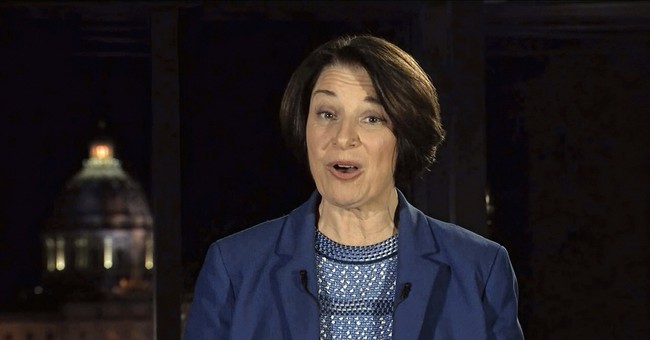 On CNN's State of the Union Sunday, Senator Amy Klobuchar (D-MN) spoke about this week's field hearing in Georgia on voting rights and the obstacle the filibuster poses to Democrats' attempts to seize control of elections.

"What I think we should do, myself — having been here the last decade and seeing exactly what's going on — we need to abolish the filibuster," Klobuchar said, repeating a call made by many radical leftist Democrats.

Those calls have only increased after the so-called For the People Act failed to secure enough votes to overcome a Republican filibuster earlier this summer, setting up yet another act in the Democrats' great tragedy of allegations that election integrity measures are the worst thing to happen to America since the Civil War.

"I'm here in Georgia to tell people we're not giving up just because of some archaic rule in the Senate that basically was set up for not good purposes," Klobuchar said, adding the filibuster "is once again blocking legislation that would help the people of this country."

Her call to abolish the filibuster is portrayed as a clear-eyed conviction for which she's long advocated during her time in the U.S. Senate — but that's not the case.

In April of 2017, Klobuchar signed a letter — along with sixty-one other U.S. Senators — calling on Leaders McConnell and Schumer to preserve the filibuster she now condemns.

"We are writing to urge you to support our efforts to preserve existing rules, practices, and traditions as they pertain to the right of Members to engage in extended debate on legislation before the United States Senate," reads the letter spearheaded by Senators Susan Collins (R-ME) and Christopher Coons (D-DE) that Klobuchar signed. "We are united in our determination to preserve the ability of Members to engage in extended debate when bills are on the Senate floor," it continues.

We are mindful of the unique role the Senate plays in the legislative process, and we are steadfastly committed to ensuring that this great American institution continues to serve as the world's greatest deliberative body. Therefore we are asking you to join us in opposing any effort to curtail the existing rights and prerogatives of Senators to engage in full, robust, and extended debate as we consider legislation before the body in the future.

Yet within five years, Klobuchar would go from urging the preservation of these rules and procedures to calling them "archaic" and "set up for not good purposes" as part of an attempt to abolish the filibuster. By her own words, Klobuchar's push to end the filibuster will dethrone the Senate as the world's greatest deliberative body, all so she and her radical colleagues can push through their unpopular agenda that can't secure enough support to advance through established processes.