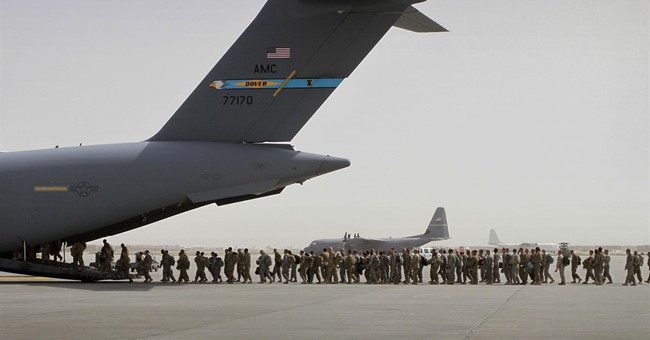 The Pentagon confirmed Friday that Bagram Air Base, north of Kabul, Afghanistan, was turned over to Afghan forces after two decades of American use for attacks against al-Qaida following 9/11.

The handover to Afghan National Security and Defense Forces comes as the Biden administration continues its withdrawal from Afghanistan, now set to be completed before the target date of the 20th anniversary of the September 11, 2001 terror attacks that killed nearly 3,000 individuals on U.S. soil.

As control of the now-former center of American power in Afghanistan is transferred, the Taliban continues its campaign to retake the country. Toward the end of June, the terrorist group swept across northern Afghanistan, taking dozens of districts, some of which were surrendered by Afghan forces without a fight as the country's military morale falls and manpower is stretched thin.

Reportedly numbering around 260,000, the Afghan security forces — trained and equipped by the U.S. military over the last twenty years — "should be strong enough to prevent the Taliban from seizing power in the immediate aftermath" of American forces' departure in early September. Afghanistan's government, however, is not expected to retain control over the country for long and hundreds of Afghan security force members have been captured or killed by the Taliban as its offensive to retake the country begins.

A June report from the U.S. intelligence community concluded that the government of Afghanistan could collapse within six months of America's withdrawal.

The speed with which the government could fall to insurgent control has increased concerns about the safety of the thousands of Afghan citizens who helped the U.S. military over the last two decades and risked their lives to provide translation and other services to American troops.

Rep. Michael McCaul (R-TX) said these individuals are "really at the mercy of the Taliban" and "when our troops withdraw at the end of July, I think you'll see a complete takeover of the country."

"We promised we would get them a special immigration visa and yet we haven't done that yet," McCaul told CNN Jake's Tapper. "It will take... at least a year to process. So we have to really evacuate them out of country to a safe country where we can process the visas."

GOP Rep. Michael McCaul and Daniel Elkins, a Green Beret who served in Afghanistan, discuss the urgent bipartisan plea from Congress for the State Department to issue visas for Afghans who helped US military. pic.twitter.com/fnACnwHpj3

"We have to protect the people who protected us over there... no man left behind, no one left behind. We have a moral obligation to protect them because they will be in the bullseye of the Taliban if we leave them behind," McCaul emphasized.

White House Press Secretary Jen Psaki said Friday that the thousands of Afghan citizens who helped American forces and are awaiting visas will be moved out of their country by the time American troops complete their withdrawal.

Following remarks at an event Friday, President Biden contradicted the U.S. intelligence community's evaluation of the Afghan government's ability to withstand Taliban attacks, saying "I think they have the capacity to sustain the government."

When asked more about his decision to pull troops out of Afghanistan, Biden cut off reporters, reasoning he couldn't take questions on the subject because of Independence Day.

Biden: "I'm not gonna answer any more questions about Afghanistan. Look, it's 4th of July... I'll answer all your negative questions- not negative, your legitimate questions." pic.twitter.com/imz44XyNhF