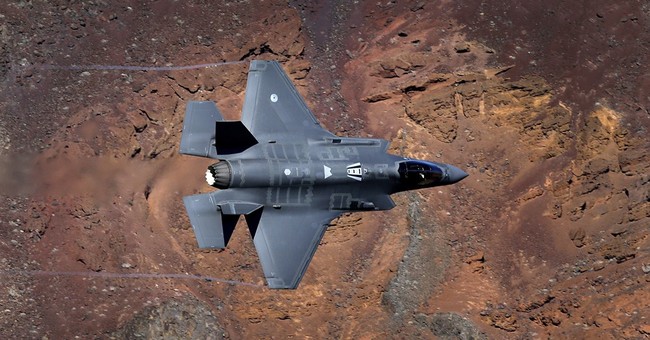 Defense contractor Lockheed Martin tossed its executives to the woke wolves recently for training to help them check their white, male, and heterosexual privilege according to internal documents posted to Twitter Wednesday afternoon.

Writer and Manhattan Institute fellow Christopher Rufo posted screenshots of the documents that he says were part of a "three-day white male reeducation camp" that Lockheed Martin executives attended via Zoom.

The program was led by the consulting firm White Men As Full Diversity Partners, which specializes in helping white males “awaken together.” The participants included a former three-star general and the vice president of production for the $1.7 trillion F-35 fighter jet program. pic.twitter.com/x5YU2bBNbn

The training program was hosted by White Men As Full Diversity Partners, one of many woke consulting firms that have popped up in a new and insufferable cottage industry as companies bend to the will of woke culture warriors and younger employees.

The ludicrous training included an exercise where Lockheed Martin employees were asked to list words that they associated with "white men," according to Rufo. The diversity trainers reportedly listed terms such as "can't jump," "KKK," "Aryan Nation," "NASCAR," and "Republicans."

Other training materials shared by Rufo included a list of "key white male culture characteristics" that included "A tendency to rugged individualism," "A can-do attitude," and "Operating from principles and conscience."

A list of "white privilege statements" was also part of the training that looks more like something that would be presented as part of UC Berkeley's freshman orientation rather than taught to the leaders who developed American fighter jets.

"I can go into a hairdresser or barber shop and find someone who can cut my hair," is one of the privilege statements, as is "I can be late to a meeting without having the lateness reflect on my race."

Additional signs of white privilege apparently include "I can use the word 'whom' without appearing pretentious," "I can choose blemish cover or bandages in 'flesh' color and have them more or less match my skin," and "I can commit acts of terrorism, violence or crime and not have it attributed to my race."

Next, participants were asked to repeat and internalize 50 “white privilege statements,” including: “My culture teaches me to minimize the perspectives and powers of people of other races”; “I can commit acts of terrorism, violence or crime and not have it attributed to my race.” pic.twitter.com/uA8tZXajFi

The training materials devolve into absurdity quite quickly, according to the documents, which also required participants to check their male privilege.

Statements to internalize include "I am judged less for the attractiveness of my appearance," "My gender is rarely subject to sexual objectification by the media and popular culture," "If I am in a bad mood, show emotion, or discipline someone, comments don't circulate about it 'being that time of the month,'" and "When offered a promotion, I do not have to consider whether it will be worth the extra effort required because I am the first person of my gender to hold that type of position."

Participants then repeated and internalized 59 “male privilege statements,” including: “My earning potential is 15-33% higher than a woman’s”; “My reproductive organs are not seen as the property of other men, the government, and/or even strangers because of my gender.” pic.twitter.com/NFC4vc53us

Rufo slammed the White Men As Full Diversity Partners training and Lockheed Martin's indulgence in such woke nonsense calling it "pure neoracism." "I call on the United States Senate to launch an immediate inquiry into the racist practices" at Lockheed Martin, he added.

Lockheed Martin's decision to engage with inane training like this is yet another example of how the woke orthodoxy that festered on America's college campuses for years has reached a critical mass and spilled over to affect other arenas in our society—even America's largest defense contractor.

Rather than focusing on how to beat the technological advances of countries like China, Russia, and Iran, Lockheed Martin is obsessed with making its executives ponder whether their privilege allows them to use the word "whom" without sounding pretentious.