Tone Deaf: Michelle Obama Wears $1,750 Dress In One Of The Poorest Countries In World 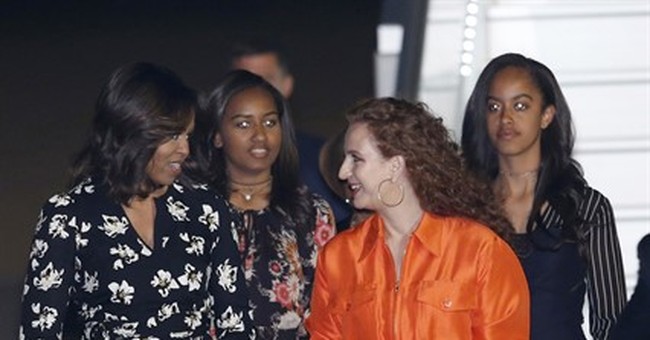 First Lady Michelle Obama, along with daughters Malia and Sasha, is on a trip to Liberia and Morocco to promote Let Girls Learn, the White House initiative for girls’ education in developing countries.

Her cause was noble—62 million girls around the world do not attend school. Often-insurmountable barriers like teenage pregnancy, lengthy commutes and chores at home take intelligent, ambitious students out of school after elementary education.

Unfortunately, Mrs. Obama did not seem to grasp the seriousness of the issue. The Washington Free Beacon reported that the First Lady wore a $1,750 Proenza Schouler floral wrap dress upon arriving in Marrakech. The average income per year for a Liberian is $370. In Morocco, paying for the designer garb would gobble up 60 percent of the average citizen’s yearly income.

Data from the World Bank shows Liberia’s average income is the fourth-lowest in the world. It makes little sense why Obama would waste taxpayer dollars to flaunt such opulence in a place of such abject poverty.

The Daily Mail estimated the full trip would rack up quite the bill as well: her airplane costs $11,684 per hour to operate. This will amount to $300,000 for the flights alone— then add on the First Lady's security, staff and fashion expenses. Mrs. Obama’s trip to South Africa and Botswana in 2011 cost taxpayers $424,142, according to The Daily Mail.

In addition to her daughters, Mrs. Obama is traveling with actresses Meryl Streep and Freida Pinto and CNN reporter Isha Sesay, who is making a documentary about girls’ education around the world. The First Lady has posted travel diary entries on hellogiggles.com, where she explained the dire state of education in Africa:

“The average Liberian family lives on less than two dollars a day, and about 90 percent of the country has no access to electricity. During the Ebola epidemic, entire communities were devastated, infrastructure crumbled, and most schools closed for six months, which left girls particularly vulnerable. Teen pregnancy rates increased, and when schools did re-open, attendance rates dropped, in part because in Liberia, pregnant girls are strongly discouraged from attending school.”

On Tuesday, Mrs. Obama traveled to Marrakech and met with female students from across the country. The White House said 98 percent of Moroccan children receive elementary education, but only 14 percent of girls in rural areas attend high school.

There, she announced that the U.S.-based foreign aid agency Millennium Challenge Corporation will invest $100 million “to transform Morocco’s middle and high school education system, helping students across the country – including about 50,000 adolescent girls – get the skills they need to have the careers they dream of.”

USAID will put $27 million into the Let Girls Learn initiative in Liberia as well. The First Lady finishes her trip Wednesday in Spain, where she will meet with Queen Letizia.