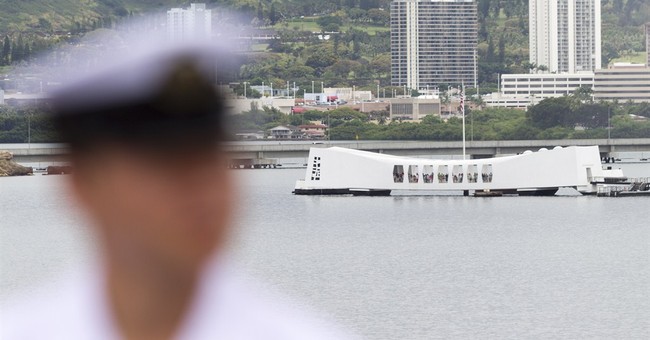 More than a dozen survivors will be among the visitors today to the Pearl Harbor Visitors Center in Oahu, Hawaii. According to Fox News these men offered a toast to each other with champagne glasses replicated after the ones on the USS Arizona. They also shared a bottle of sparkling wine which had been sent as a gift to Pearl Harbor survivors from former president Gerald Ford's 1975 visit to Spain.

“As we reflect on the lives lost at Pearl Harbor, we remember why America gave so much for the survival of liberty in the war that followed that infamous day.Today, with solemn gratitude, we recall the sacrifice of all who served during World War II, especially those who gave their last full measure of devotion and the families they left behind.As proud heirs to the freedom and progress secured by those who came before us, we pledge to uphold their legacy and honor their memory.”

Americans across the nation today remember and honor our military, especially those who served or lost their lives during the attack on Pearl Harbor, Dec. 7 1941.

Today we remember those who lost their lives in the attack at Pearl Harbor #PearlHarborDay http://t.co/1bBlCkeGcT pic.twitter.com/xL4XF2l6Fb