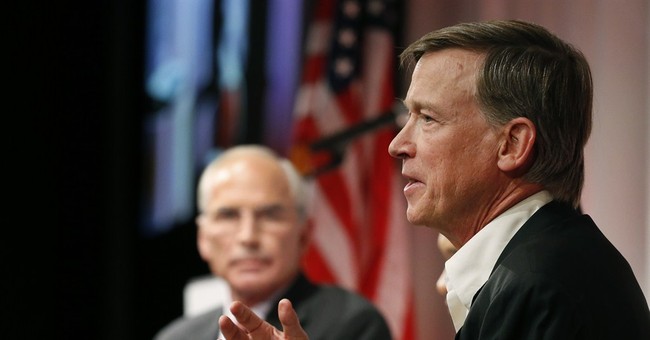 It is anyone’s game in the Colorado governor’s race. Democratic Gov. John Hickenlooper and GOP Rep. Bob Beauprez are in a dead heat (45-44) and only eight percent of likely voters remain undecided, according a Quinnipiac University poll released Thursday.

Tim Malloy, the assistant director of the poll, noted:

"In just a few weeks, what looked like a slide toward political oblivion for Gov. Hickenlooper morphs into a down-to-the-wire Rocky Mountain slugfest with Bob Beauprez.

Let's see who's still standing when the bell rings on Election Night. Will they be talking about Hick the Comeback Kid of 2014, or Bob 'The Bomber' Beauprez?"

Gov. Hickenlooper, once the most popular governor in the country according to Public Policy Polling, is now finding it much more difficult to harvest support.

Some voters are turning away from Hickenlooper due to public safety concerns. Dave Maney, chief executive officer at Deke Digital LLC, told Bloomberg he donated to Hickenlooper in 2010, but will cast his ballot this year for Beauprez:

"I saw a guy I thought matched up with the way I looked at the world who failed to stop a runaway legislature. He went from being happy to drink fracking fluid to somehow being willing to brook this giant discussion on drilling near communities. Then he moved to restrict peoples’ personal freedoms with guns."

In addition to restricting Coloradans' ability to defend themselves, Hickenlooper’s softness on crime is raising concerns. The governor intends to grant clemency to convicted death-row inmate Nathan Dunlap, a man who murdered four Chuck E. Cheese employees and seriously wounded a fifth in 1993. Family members of the victims are speaking out on the issue.

Here is a video with Dennis O'Connor, whose daughter Colleen was murdered:

This is not an isolated example of public safety dereliction, according Beauprez’s campaign manager Dustin Olson:

"Hickenlooper has a long list of public safety failures, including the release of dangerous prisoners into our neighborhoods, an understaffed Parole Division, policies that discourage accountability for parolees even for serious violations, and an inability to lead his party on common sense legislation like a Felony DUI law."

Mail in ballots began flooding in last week, and more than 330,000 Colorado voters have already made their decision.