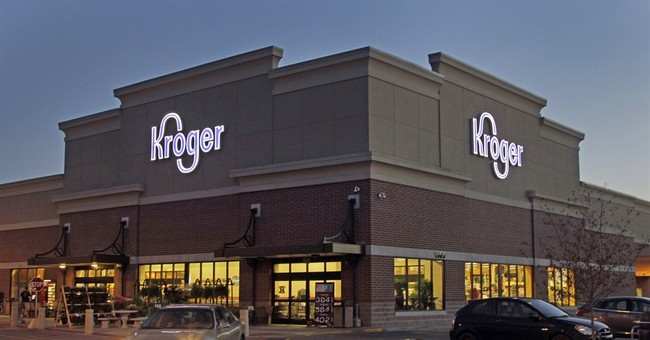 Moms Demand Action, a gun-control advocacy group funded by former New York Mayor Michael Bloomberg, want guns out of the grocery store. The group has challenged the nation’s largest supermarket retailer, Kroger Co., to ban open-carry policies in all of their  2,640 locations across America.

The petition states that grocery stores are the last place mothers with their children want to see someone openly carrying a gun. One advocate even tweeted that she has instructed her kids to run if they see a man with a gun (question: does this mean they run from police officers?).

Attached to the petition is the the picture shown below:

The scenario used in the group’s media campaign undoubtedly is ridiculous. No one carries around an AK-47 in a grocery store. Even the  NRA acknowledged that carrying such weapons is abnormal and “downright weird and certainly not a practical way to go normally about your business while being prepared to defend yourself.”

This is hardly the first company Moms Demand Action has tried to force a gun-ban on. The group has recently petitioned Staples, Starbucks, Chipotle, Sonic, Target, Sonic, Chili’s, and Jack-in-the-Box to accept gun-bans. These have hardly been well-received. Staples actually  called in security to remove the group. Additionally, companies that have endorsed the ban have failed to create safer spaces for their customers.

Ironically, there were two robberies and a shooting at Jack-in-the-Box restaurants within weeks of their request that law-abiding citizens visit unarmed, and a Sonic in Topeka, Kansas was robbed the very day on which that chain asked law-abiding citizens to leave their guns home.

Target stores experienced two robberies within weeks of "respectfully" asking law-abiding citizens to leave their guns home at home, and on July 22, the retailer had their first post-gun ban murder when a man was fatally shot at a Los Angeles-area target.

Kroger Co. seems unfazed by the petition. Spokesperson Keith Dailey claimed they have customers on both sides of the argument and trust them to act responsible in stores.