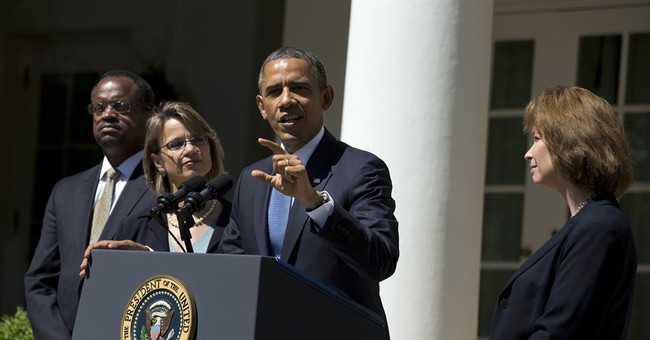 The D.C. Circuit Court of Appeals is the second-most influential court in the nation, and the fight to bar Obama’s three Democrat judicial nominees — stacking the court in his favor — is underway.

Senate Majority Leader Harry Reid (D-Nev.) filed cloture on 8 nominations Monday evening, including that of Patricia Millett to the D.C. Circuit Court of Appeals. The first cloture vote is expected when the Senate convenes Wednesday.

“People don’t focus much on the D.C. Circuit. It is, some say, more important than even the Supreme Court,” Reid told Nevada Public Radio in August.

The D.C. Circuit Court has not done any favors for President Obama. Not only did it rule Obama’s recess appointments to the NLRB unconstitutional. It also refused to dismiss Halbig v. Sebelius, which challenged the IRS’s authority to penalize those refusing to establish a health insurance “exchange” under Obamacare.

According to Legal NewsLine:

“Often, the court is responsible for resolving critically important cases involving the separation of powers, the role of government, the rights of federal officials, and the decisions of a vast array of administrative agencies.”

Reid openly stated the need for another Democrat appointment to turn the tables in their favor:

The President wants to get his people in the court to pave a glide-path to his aggressive regulatory agenda, said Carrie Severino, policy director and chief counsel of the Judicial Crisis Network.

Severino helped launch a JCN campaign Friday urging individuals to call their Senators and stop the D.C. Court packing. Not only does the move show President Obama’s political agenda it is a poor use of federal resources, according to Severino:

“It doesn’t make sense for people to be twiddling their thumbs in D.C. when they could be doing real work.”

He filed the Court Efficiency Act in April in an attempt to reallocate authorized judgeships:

“This legislation is straightforward. It would add a seat to the Second and the Eleventh Circuits. At the same time, it would reduce the number of authorized judgeships for the D.C. Circuit from 11 to 8.”

Severino and former White House Counsel Boyden Gray will testify against the nominations before a full House Judiciary committee at 2:00 pm Tuesday.