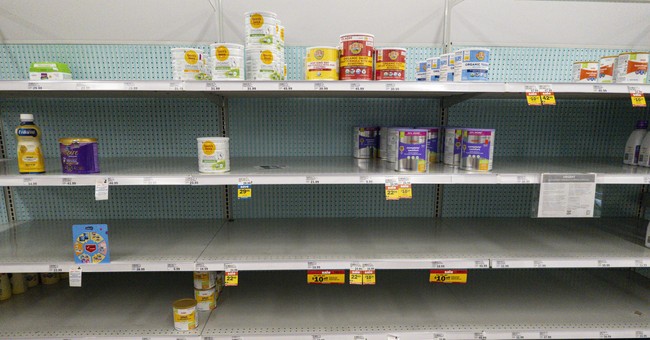 It looks like America’s shortage of baby formula won’t be resolved any time soon.

During a Senate Health Committee hearing, the Food and Drug Administration Commissioner Robert Califf told lawmakers not to expect baby formula until at least late July.

“It’s going to be gradual improvement up to probably somewhere around two months until the shelves are replete again,” Califf said, but promised there will be a surplus.

Abbott Nutrition says it plans to resume production at its Michigan plant on June 4, and start shipping out its specialty formula on June 20, but Califf was less than hopeful. He said the company had yet to meet the FDA’s requirements, and doubts it will be ready in the next coming weeks.

“Our oversight is critical, but make no mistake,” Califf said. “The return to normal will only take place when Abbott takes steps to resume in a safe manner," adding "would you go in a kitchen if there were bacteria growing all over the place, standing water, and people tromping through with mud on their feet? Which is essentially what the inspection showed."

The plant was shut down in February due to an FDA inspection that found strains of harmful bacteria known to be deadly to infants in its products.

“I think Abbott would agree with us that they’re not ready to open. They had to replace the roofs, replace the floors, and they’re still not done,” Califf said, adding “You just can’t reopen a plant with bacteria growing in it.”