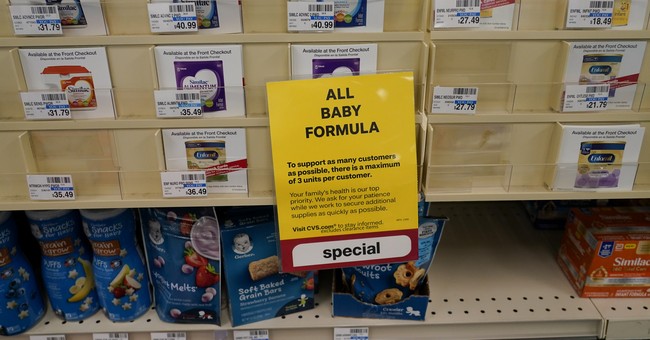 The Associated Press tweeted quite the take late last week regarding issues plaguing the country, primarily inflation and the baby formula shortage. As the mainstream media is prone to do, it focused on how Republicans are reacting and putting the issue on Democrats, the party that controls both chambers of Congress and the White House.

As our friends at Twitchy pointed out, people were quick to take aim. There were 2,200 replies, and of the 664 retweets, 526 were quote retweets expressing disdain.

Joe Biden, just an elderly bystander to events in this country happening around him. Give the guy a break already. https://t.co/iJ4UbjOFMD

They are blaming the party in total control of the government! Oh no!

It's almost like Democrats have been in control of both houses of Congress and the White House... but the AP hasn't figured that out yet.

and every major city

Biden and the Democrats watched gas and grocery bills rise every month for working families for almost a year.

AP: Look at the pouncing!

Republicans aiming to retake control of Congress have already sharpened a message centering around blaming Democrats for high inflation, expensive gas, migrants crossing the U.S.-Mexico border and violent crime in some cities.

But GOP leaders landed on an issue this week that it hopes could prove even more potent: tying President Joe Biden to a shortage in baby formula.

Parents are suddenly running into bare supermarket and pharmacy shelves in part because of ongoing supply disruptions and a recent safety recall. But in an election year that was already shaping up to be rocky for Democrats, Republicans sense that the shortage could prove to be an especially tangible way to argue that Biden is incapable of quickly solving problems confronting the U.S.

Not only are Democrats the party in power, but their policies are to blame for these issues, though the Biden administration has blamed a variety of other sources, including and especially Vladimir Putin and Russia's invasion of Ukraine. These issues have predated the late February invasion, though. There is no mention of that blame game in Weber's reporting.

Further, when it comes to the baby formula shortage, the White House's poor response is mentioned in Weber's report, but there is zero mention of how the Republican Party has been warning of this issue since February.

Democrats, their allies in the mainstream media, and Twitter users took to blaming Rep. Elise Stefanik (R-NY), who also serves as the House Republican Conference chairwoman and is briefly mentioned in the AP piece.

Not only is the Republican Party rightfully looking to appropriately blame the party in power, who is at fault, while they are on track to take control back of Congress, so are many Americans.

Inflation is a top issue, according to multiple polls from FiveThirtyEight, Gallup, and Pew Research.

The president also receives low marks on "violent crime," which Weber seeks to downplay by mentioning it as an issue "in some issues." Biden has a 39 percent approval rating in the CBS poll mentioned above.

Weber does note that "Democrats believe outrage over the U.S. Supreme Court possibly ending the right to an abortion could galvanize women and other key voters, and thwart or at least lessen a Republican wave in November," but voters still prefer to focus on inflation, as an illuminating poll from FiveThirtyEight revealed on Tuesday.

Further, when voters know the truth about the Democratic position on abortion, which is to not only codify the Roe v. Wade decision but expand it, they are much less likely to support it. More Republicans (6 percent) than Democrats (4 percent) cared about abortion, according to the FiveThirtyEight poll.

The Republican Party is already poised to gain control of the U.S. House of Representatives and is now increasingly likely to gain control of the U.S. Senate. This is a matter of historical trends that the president's party in power loses seats for his first midterm election. Biden's particularly low approval ratings in the polls and the high number of Democrats retiring are further hurting the Democrats' chances when it comes to any hope of remaining in power.