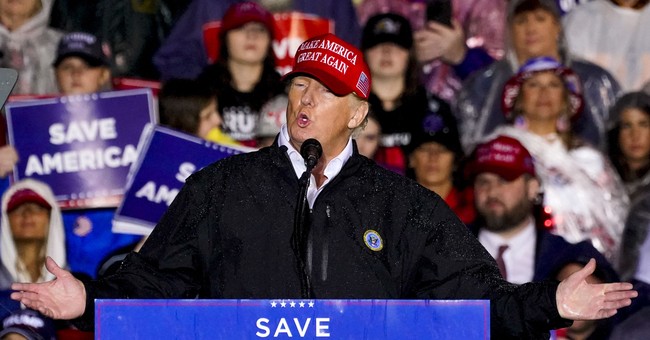 As I highlighted last July, Mastriano had initiated a forensic audit of the 2020 presidential election, which he outlined in an op-ed posted to his official Senate website.

Indeed, Trump's endorsement highlighted the 2020 election. "There is no one in Pennsylvania who has done more, or fought harder, for Election Integrity than State Senator Doug Mastriano," the endorsement began.

Trump went on to note that Mastriano "has revealed the Deceit, Corruption, and outright Theft of the 2020 Presidential Election, and will do something about it," though he also pointed out other issues, such as how Mastriano "will also Fight Violent Crime, Strengthen our Borders, Protect Life, Defend our under-siege Second Amendment, and Help our Military and our Vet."

"He is a fighter like few others, and has been with me right from the beginning, and now I have an obligation to be with him," Trump also wrote, highlighting another key part about the endorsement.

The endorsement also reminded readers that Trump endorsed Dr. Mehmet Oz in the Senate primary, to replace Sen. Pat Toomey (R-PA), who is retiring, and referred to the upcoming midterms as "the most important Midterm Election in the history of our Country."

"Mastriano" is now trending on Twitter as a result, with people sharing their thoughts before and since the endorsement became official.

Honest to goodness this is about a 40-50% chance that a Mastriano Gov ticket costs the PA GOP the state house. Maybe even a bit higher than that.

If Doug Mastriano is the nominee:

For the first time in a long time, Democrats will have a TRIFECTA in PA.

Trump cares so much about election integrity, that he's ensured a Democrat wins the governorship of one of the most important swing states in the country.

Mastriano is a clown, it's going to be a blood bath. https://t.co/KrJcwW6UtQ

Sources said that Liz worked for Mastriano and lobbied hard for this endorsement. They threw this election to the Democrats, congrats Josh Shapiro. https://t.co/tLFrhuzIjQ

The Lincoln Project also weighed in, to hysterically claim that "there is almost certainly no chance that a Democratic presidential candidate's victory in Pennsylvania in 2024 will be certified."

“What must be conveyed clearly and unflinchingly is this: If Mastriano wins the general election, there is almost certainly no chance that a Democratic presidential candidate’s victory in Pennsylvania in 2024 will be certified by the state’s governor.”https://t.co/7rcCs2vxeB

The primary is this upcoming Tuesday, May 17. Josh Shapiro, Pennsylvania's current attorney general, is running for governor as a Democrat.