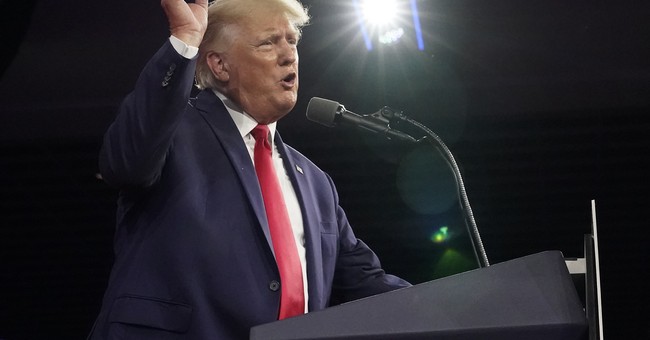 The censorship of Big Tech has truly been ramping up as of late. On Friday, YouTube informed the RNC that they had pulled a video of the latest edition of "Real America with Ronna McDaniel" between RNC Chairwoman Ronna McDaniel and former President Donald Trump. The reason given was to do with claims Trump made about the 2020 election.

Tim Pearce, writing for The Daily Wire, included email correspondence with YouTube in his reporting:

I wanted to let y’all know that your video, Real America Season 2, Episode 5: President Donald J. Trump, has been removed from the GOP YouTube channel, because it violated our policies pertaining to elections misinformation and does not contain sufficient EDSA context. Namely, the video contains claims that the 2020 election was “rigged,” with “tremendous voter fraud,” and countervailing views, which we refer to as EDSA context, on those remarks are not provided in the video, audio, title or description.

To clarify, this content would be permitted if it included sufficient context with countervailing views.

As a result, a one-time warning has been applied to the channel. This warning does not restrict your access to YouTube features, but future violations may result in Community Guidelines strikes and restrict feature access. You can find more information about our other Community Guidelines here.

Those "Community Guidelines" have sections directly relating to "Elections misinformation policies." One such example pertaining to the 2020 election, under "Election integrity," mentions "Claims that a candidate only won a swing state in the U.S. 2020 presidential election due to voting machine glitches that changed votes," under what is not allowed.

In a statement provided to Townhall, McDaniel emphasizes concerns of what could happen next for average Americans, especially when Big Tech has no shame going after big names in the conservative movement.

"YouTube’s decision to remove a filmed conversation between former President Trump and the Chairwoman of the Republican Party is just the latest example of Big Tech’s chilling approach to censoring conservative opinion. Silicon Valley oligarchs care more about advancing their political agenda and de-platforming their opponents than they do about free speech. This blatant censorship should concern every American: if they can silence a former President, they can silence any citizen who they view as stepping out of line," she warned.

BREAKING: YouTube has pulled down @GOPChairwoman’s interview with President Donald Trump from the GOP page for “misinformation.”

Big tech censorship is at it again! https://t.co/Xk7w38Mv0t

This is not the only conservative who has been targeted by YouTube over its "Election misinformation policies."

Last December, as I covered, YouTube removed a video featuring attorney and election integrity expert Cleta Mitchell speaking with J. Christian Adams, formerly of the Department of Justice (DOJ), who is currently with the Public Interest Legal Foundation (PILF), which frequently releases reports about concerns with election integrity and voter fraud.

Further, such censorship is one-sided. Included in the "Election integrity" section mentions "Claims that dead people voted in numbers that changed the outcome of the U.S. 2016 presidential election" under what is not allowed.

Video clips of Hillary Clinton disputing the results of the 2016 presidential election which she lost and resulted in Trump becoming president are still widely available on the website, though.

Stacey Abrams, who lost to Gov. Brian Kemp (R-GA) in 2018 and who is running once more in 2022, continues to mislead about whether or not she refused to concede that race.

Abrams appears to also have been emboldened by getting away with her claims about the 2018 Georgia gubernatorial race. She and former Gov. Terry McAuliffe (D-VA) who won the 2013 gubernatorial race in Virginia but lost last November to the current Republican governor, Glenn Youngkin, continued to spout claims her race was stolen from her. Throughout the campaign, McAuliffe falsely accused Youngkin of disputing the 2020 presidential election results, while he himself had disputed the 2000 presidential election results.

Last October, shortly before the election in Virginia, Abrams claimed that Youngkin was planning on "stealing votes" to win, without evidence.

If big tech can silence a president, what can they do to you?https://t.co/Xk7w38Mv0t

The message the RNC is stressing in this censorship is that it is rearing its ugly head by spreading across various platforms, and targeting even the most powerful, which doesn't bode well for average Americans.