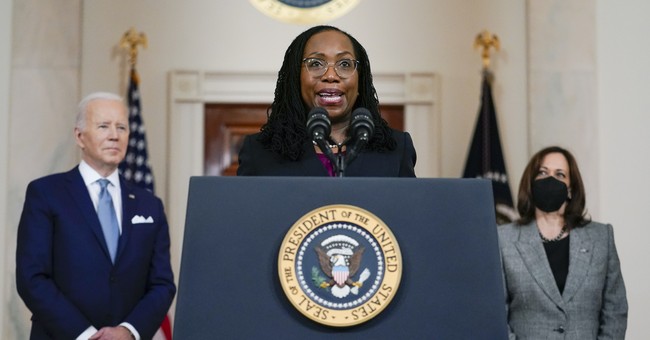 In his live-tweeting of the confirmation hearings this week to decide if Judge Ketanji Brown Jackson will serve on the U.S. Supreme Court, Committee for Justice (CFJ) President Curt Levey made a telling point about how Judge Jackson was selected as the nominee in the first place, which included considerable involvement from White House Chief of Staff Ron Klain.

.@SenJohnKennedy quotes @WHCOS Ron Klain, Biden’s brain: “I hope #SCOTUS will intervene when the nation’s conscience & laws need a jolt in a progressive direction”—i.e. Constitution is living and evolves leftward. Klain chose #KBJ. That’s why we worry abt her judicial philosophy.

As he was questioning Judge Jackson on Wednesday night, Sen. John Kennedy (R-LA), was discussing how "rights should be adjudicated." This led to the senator reminding that President Joe Biden wanted a justice who would read new rights into the 9th Amendment, which should be concerning, since Supreme Court justices aren't elected.

Kennedy also quoted an op-ed from Klain in 2019 published in The Washington Post, when Klain was a lawyer in Washington, D.C. "We need to prepare for a complete reversal of the role the Supreme Court plays in our lives," the bold headline read.

"Even in recent years, when the court has been less protective of individual rights and has chipped away at prior protections, advocates have clung to the hope that the Supreme Court might intervene whenever the nation’s conscience and laws need a jolt in a progressive direction," a section the senator quoted from the op-ed read.

"That's policy making," Kennedy offered as he read some of Klain's op-ed. "Do you agree with that statement," he asked Judge Jackson, clarifying he was asking about what Klain said.

Judge Jackson answered by pointing out "Senator, that's a political statement made by someone in the executive branch." As she hesitated with how to answer further, Kennedy offered "I'm not gonna push you on that, and I get it, it's not a good time to make the chief of staff mad, is it?"

Jackson and Kennedy laughed about it, as the point had already been made. "Well, judge, I hope you'll keep this in mind if you're confirmed," the senator asked.

Pres. Biden and his now Chief of Staff wanted a #SCOTUS nominee who would read liberalism into the Constitution and “intervene whenever the nation’s conscience and laws need a jolt in a progressive direction.”

And it looks like his nominee knows it. pic.twitter.com/4d256KaSx3

Here's some more of what the senator didn't have time to get to, which illustrates even further how Klain sees the Court:

The past decade has seen a conservative court slow further social progress, but the next decade could feature a radical-right court that would not only narrow past gains but also erect barriers to prevent progressive political action. It would be a 180-degree turn from judicial consideration of abortion rights, civil rights and political reform to judicial prohibition against legislative action to advance these aims.

Are we ready for a constitutional order in which the Supreme Court no longer stands for equality and progress — or no longer is merely indifferent to those aims, as it has been more recently — but becomes a bulwark of retrogression and reversal? That was the Supreme Court of 100 years ago, and it could be back sooner than any of us ever believed.

With Klain being in a different position now, an even greater and more influential one, these points made in the op-ed are even more concerning, as it highlights with a stunning amount of honesty and transparency what liberals and what liberal administrations think the role of the courts is.

Again, it calls to mind the concerns that CFJ and others have with Judge Jackson's nomination.

It's worth reminding that as Katie covered in February, Klain reportedly had been the one to leak Justice Breyer's nomination before Breyer himself could share the news widely.