Virginia Delegate Claims Gov. Youngkin Not a Man of Faith Over Executive Orders 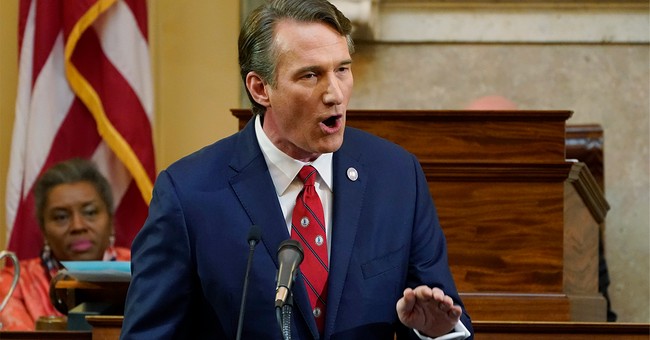 Criticism over Gov. Glenn Youngkin's (R-VA) day one executive orders putting the power back in the hands of parents to decide if their children will wear masks to school and putting a stop to divisive lessons in school such as Critical Race Theory (CRT) has hit new lows with personal attacks.

Del. Don L. Scott, Jr., a Democrat from the 80th district claimed that Gov. Youngkin is not sincere in his faith and prayer life because of such executive orders.

"When I was here about a month ago with freshmen, unexpectedly the governor, the governor-elect at the time, he came in this chamber with the freshmen who were being trained and taught and talked about how we do things on the floor," Del. Scott said during a Wednesday floor speech.

"And the first things that I recall him saying was that he has a strong prayer life, and that he was praying for everybody. And so far from what I've seen from his day one activities is not someone who is a man of faith, not a Christian, but someone who wants to divide the commonwealth, someone who wants to cause division in this commonwealth," Scott continued, to jeers from the chamber. "I know the truth hurts," he said, presumably to the delegates who were reacting. "I don't want to make you cry like saying 'Critical Race Theory' 'cause I know it hurts your feelings."

Scott was momentarily cut off from continuing further as the jeering continued in the chamber, before Speaker C. Todd Gilbert (R) gaveled for order.

Once Scott continued after there was order in the chamber, he doubled down on claims that Youngkin's executive orders to do with empowering parents and taking divisive political rhetoric out of the classroom was "very divisive."

It is not clear how Youngkin fulfilling his campaign promises on issues such as mask mandates or CRT means that he lacks sincerity in his Christian faith.

Throughout the primary and general election campaign, Youngkin and his wife, Suzanne, have been open about sharing the role faith has played in their life. On the morning of his inauguration, Youngkin held an inter-faith prayer event. There was also a benediction and a convocation at his inauguration ceremony, and towards the closing of the ceremony, Youngkin himself led a prayer.

A longer video of Scott's remarks that Townhall obtained portrays Scott in an even more unpleasant light, as he began his remarks by accusing other delegates of using "race as a wedge issue" and "black bodies as a prop in your campaigns," which he went on to further claim was "an attempt to rally [their] base." Throughout his floor remarks, Scott claimed that the topics of race and CRT were being "used as a political tool."

He also claimed that a focus on such educational issues was somehow "dangerously incompetent" and was being done for "political purposes only."

Scott also claimed that the governor did not have subsequent day two, day three, or day four plans. The governor's office last week updated guidelines, is inviting parents to reach out with questions, and has parents "to listen to their principal, and trust the legal process."

Scott also went after Attorney General Jason Miyares (R), who has already requested that the Virginia Supreme Court drop such lawsuits from numerous school districts against the governor. Miyares has assured Virginians that on this issue, and others, there is a "new sheriff in town," and that the Virginia constitution empowers parents when it comes to having a fundamental right in their child's education and determining what's best.

Sources close to the Capitol told Townhall that Gov. Youngkin met with Del. Scott. The sources indicated the governor and delegate "had a good conversation where they agreed to disagree, but not be disagreeable."