If Build Back Better Continues to Go Wrong, It Looks Like It Could Be Bernie Sanders' Fault This Time 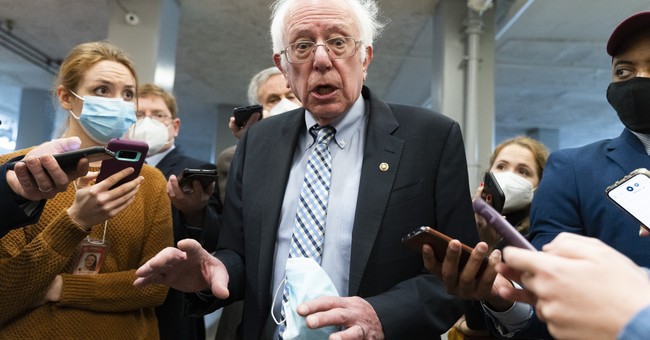 The White House is desperately trying to resurrect Build Back Better, a major part of President Joe Biden's agenda. The administration is still talking about it, a month after Sen. Joe Manchin (D-WV) effectively killed it. Concerns for Manchin involved the cost. In trying to get Manchin on board, the White House knows that there will have to be compromises on the bill. Such compromises, though, could mean the loss of another vote, that of Sen. Bernie Sanders (I-VT). Sanders, who is the chairman of the Senate Budget Committee, had proudly owned the higher price tags. He was asked about the bill during his Sunday show appearances.

"What we cannot continue to do, in my view, is these endless backroom negotiations. The American people have got to see where we are. And after that happens, we'll do the best that we possibly can," Sanders responded in part with.

"Funny things happen when a bill gets to the floor. ... Let's put a strong bill on the floor and if Mr. Manchin or Ms. Sinema want to vote against it or whatever ... we can go from there." pic.twitter.com/WGvk6iMlwk

Todd had also asked "can President Biden count on your vote in the Senate with almost any compromise he comes up with Manchin?"

Sanders was even more abundantly clear on this response. "No. No, absolutely not. You're going to have to look at what that so-called compromise is. If it's strong, if it protects the needs of working people, if it deals with climate, I'm there. But we have to look at the details of any proposal," he said.

In his very first response, Sanders also blamed Republicans for why Biden's presidency is failing as it goes into its second year. That response entailed wanting Americans to see how Republicans vote on legislation, which they have not had to do as it hasn't come to the floor for a vote.

"We now need a new direction, in my view, and that is to take it to the Republicans, to bring important pieces of legislation that impact the lives of working families on the floor of the Senate. And if the Republicans want to vote to protect the wealthy and the powerful, that's their right. Let the American people see what's happening," his answer mentioned in part.

"And if the Republicans want to vote against lowering the cost of prescription drugs, they want to continue to give tax breaks to the rich, let them vote that way. Let the American people see what's happening and then we can come together after these votes to put together the strongest bill that we can," he went to say in another response.

This would be a theme on other shows as well.

On CNN's "State of the Union," Sanders similarly told host Dana Bash called for votes on legislation, even if they will fail, so that there is a record of how senators vote and so "we will know where we stand."

"I think there's widespread understanding of what we've done for the last six months has failed from a policy point of view... We need to change course," says Sen. Bernie Sanders on Pres. Biden signaling that he supports passing "chunks" of his spending plan. #CNNSOTU pic.twitter.com/P0RPyTtCMz

After Sen. Manchin came out against BBB during his December 19 appearance on "Fox News Sunday," Sanders that same day had also called for a vote on the bill, to put Manchin on the record.