Biden Claims We're Better Off Than March 2020, As NYC Experiences Highest Amount of Cases of Pandemic 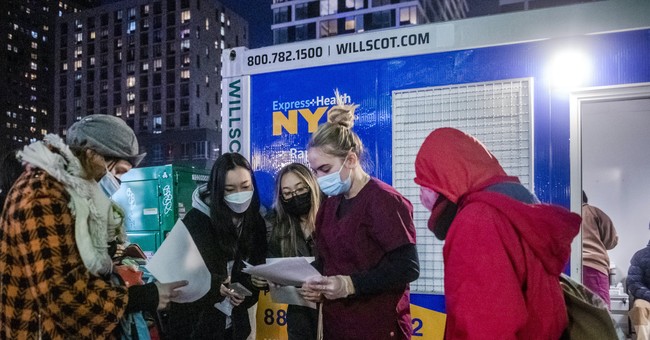 In his Tuesday remarks about the Wuhan coronavirus, President Joe Biden touched upon the differences between now and March 2020, when the virus was first declared a pandemic by the World Health Organization (WHO). "Another question that folks are asking is: Are we going back to March 2020 — not this last March 2021, but March 2020 — when the pandemic first hit?  That’s what I keep getting asked," he shared. "The answer is absolutely no. No." Despite such assurances from the president, though, New York City is actually experiencing its highest amount of the pandemic so far in people seeking tests and testing positive.

Images of New York City residents waiting on long lines in freezing temperatures have dominated the news as people wait to get tested for COVID.

Cameras not wide enough to capture the long testing line at the red Hook playground. At least 50+ deep. pic.twitter.com/fXLgkiJF7g

Omicron is now the dominant variant in the U.S. https://t.co/MlgQ053APl pic.twitter.com/gyjgtJ15Cw

Gothamist ran a piece by Gwynne Hogan from Tuesday, who wrote that "It's Not Just Lines: NYC Labs Report Longer Waits For COVID Test Results Amid Omicron Crush." Her reporting cites data through December 15, 2021 from the New York City Health department on data:

City data through December 15, showed a steady increase in the numbers of New York City residents seeking COVID-19 tests — more than 100,000 people per day, marking the highest number of any point in the pandemic. The rush precedes a busy two weeks for travel ahead of Christmas and New Years, as more new COVID-19 infections were detected in a single day than at any point so far in the pandemic.

Hogan's reporting is full of comment from New Yorkers who have been waiting on tests and test sites as well as the turnaround time they're facing:

“It’s been very hectic around here. All the labs are backed up. I have patients waiting for results, angry,” said Rosarta Kalbaj, the manager of a pop-up Rapid Test NYC testing site on Houston Street on the Lower East Side.

She said test results for PCR tests are now taking as long as three days. Before the recent surge they’d promise results within a day. Kalbaj said she was used to testing about 200 people a day. Now she’s averaging 500.

“It’s just how the city is right now,” she told Gothamist.

Matt Gove, a spokesperson for CityMD, warned it could take more than five days for PCR test results to come back due to backups at laboratories they use, though they still offer rapid tests that typically yield results within 15 minutes. Gove said the company's 150 clinics across the city have seen a 25 percent increase in patients in the past three weeks.

LABQ, which runs pop-up COVID testing sites across the five boroughs, warned people to wait up to 48 hours before even contacting them with questions about test results. Though some New Yorkers said they’d waited far longer than that.

Lower East Side resident Michelle Kuppersmith got a COVID test at a local pharmacy on Saturday, after her husband tested positive for COVID-19. She was promised results in less than 24 hours, but two days later she was still waiting. She scheduled a second test at a private clinic that offered expedited results for a $25 fee. Even so, they warned her not to expect results for another 36 hours.

At test sites around the city, New Yorkers complained of long wait times — and delayed or missing test results.

Jill Woodward, 53, and Ryan Miller, 43, both got tested Saturday at a city-sponsored, privately run rapid-test van parked on Columbia Street on the Lower East Side, after waiting in line for 4 ½ hours. They received both antigen and PCR tests.

By Monday, only Miller had received his PCR results back, and neither had received their antigen results — so they lined up again on Monday at the NYC Health + Hospitals/Gouverneur facility.

“[The testing vans] need to be audited regularly,” Woodward said, adding that she’s been unable to contact the operators to get test results.

Those on the line were given the option to take a rapid test or wait for a PCR, and Woodward took the rapid a while later, she said.

It's worth noting that New York City and New York State overall already have particularly strict protocols when it comes to combating the virus. Earlier this month, orders from Gov. Kathy Hochul (D-NY) went into effect mandating masks where proof of vaccine is not required. Vaccine passports have been required for some time in places such as restaurants and gyms throughout the city, thanks to Mayor Bill de Blasio.

By all accounts, New York City is trending upwards in cases. The Centers for Disease Control (CDC) have all New York counties listed as having a "high" transmission. The New York Times has New York experiencing a daily average of 19,420 cases, with 100 cases before per 100,000 people. It's an increase of 102 percent across the 14-day change.

Another tidbit against the Biden administration is that, as Katie pointed out last month, more people have died from the virus in 2021 than in 2020.