The Utter Incompetence from Gov. Ralph Northam Over Rape Allegations in Loudoun County is Downright Shameful 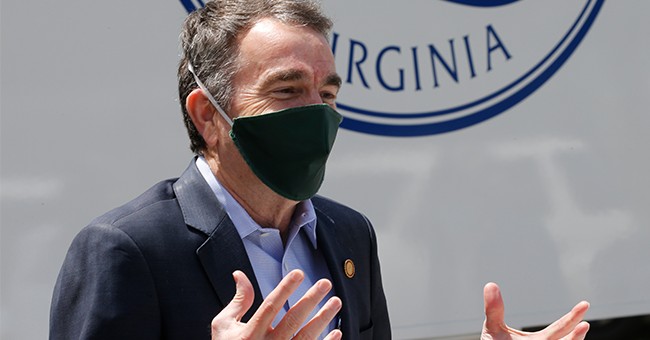 It's no longer just conservative news outlets and local activists finally realizing they can no longer ignore the rape allegations that are haunting the Loudoun County School District. But, there are still some who haven't woken up enough just yet, and then are gaslighting everybody else for it.

Perhaps most disturbing of all is that this includes the commonwealth's governor, Democrat Ralph Northam, who actually signed into law House Bill 257, which allows the school district to decide for itself if it's going to alert law enforcement about misdemeanors, including sexual battery.

This revelation comes from reporting by Scott Taylor for 7 News, with the headline of "Gov. Ralph Northam silent as Virginia law on schools reporting crimes is under scrutiny." Taylor tried to reach out to Gov. Northam for comment, but says he was turned away by Renzo Olivari, who works for Democratic gubernatorial candidate Terry McAuliffe's campaign.

Virginia Governor Ralph Northam signed the bill into law. In Arlington on Friday I-Team Investigative Reporter Scott Taylor attempted to ask Northam if he still thought the law was a great idea.

“Governor, I would like to ask you one question. I want to ask you about Loudon County why are you,” asked Scott Taylor.

“I got to get back,” said Governor Northam.

“Thanks, everybody. Thanks for coming,” says Olivari.

“You came over earlier and asked if I have questions. Can you explain why you ignored those questions?” asks Taylor.

Not deterred, Taylor says they reached out to governor's office:

After the Governor didn't answer our questions we reached out to the governor's office asking the governor to answer the following questions:

1. Last year you signed a bill into law that gave school officials the ability not to report misdemeanor sex crimes to law enforcement, which created less transparency for parents and students. In light of two recent alleged sex crimes by the same student in Loudon County Public Schools, can you explain to parents and students why you believe that law was a great idea?

2. With that lack of transparency on a laundry list of crimes not having to be reported to law enforcement, why should parents believe schools are safe in Virginia?

And here's the response:

Hi Scott — you and I both know the basic fact: The police get called immediately whenever someone says a serious crime happened at school. That was true before 2020, and it’s true now.

Now, let’s talk about the minor change to the law in 2020. Before that, too many tiny infractions triggered too many calls to the police—tying up the police’s time, diverting the school’s time onto paperwork and away from educating kids, and perhaps most importantly introducing criminal records for minor infractions best handled by school authorities.

Here’s what that looked like: Under the old law, the school was required to report lower-level criminal incidents to the police regardless of how minor the incident. For example, if a kid kicked a trashcan over, the school was required to take time out of the classroom to fill out paperwork and report that kid to the police. Of course, schools still have the authority to report any incidents that may be criminal to law enforcement. But no kid anywhere deserves a permanent record for littering—that’s why Virginia changed this law.

Right now, any incident at school that may be a felony must be reported to police immediately. Sexual assault at school, such as the allegations of what happened in Loudoun, must absolutely be reported to police. We continue to expect schools and law enforcement to work together if any incidents happen at school that present a threat to health, safety or well being of students or staff.

I would also note that the law explicitly states that any criminal activity in school must be reported to parents. Here is that section: Further, except as may be prohibited by federal law, regulation, or jurisprudence, the principal shall also immediately report any act enumerated in clauses (ii) through (v) of subsection A that may constitute a criminal offense to the parents of any minor student who is the specific object of such act. Further, the principal shall report that whether the incident has been reported to local law enforcement as required by law pursuant to this subsection and, if the incident is so reported, that the parents may contact local law enforcement for further information, if they so desire.

As Brett Hall reported in February 2020 for WAVY, another local outlet, "Republicans call on Gov. Northam to veto bill that would stop requiring schools to report misdemeanor crimes to police." Hall noted in his reporting that the governor's office did not respond with comment in time for the article's publication.

Jackie Fusco's reporting for WAVY does include comment from Northam, about the district's transgender bathroom policy, rather than HB 257:

Asked about this, Northam said the transgender student policies are meant to make all students feel welcome, safe and included, regardless of how they identify.

“I don’t believe the laws contributed to those, no,” Northam said.

Local parent, Scott Smith, is alleging that his ninth-grade daughter was raped in the bathroom by a biological boy wearing a skirt.

Northam's office did not return request for comment to The Virginia Star, as Peter D'Abrosca reported for the outlet. U.S. Sen. Tim Kaine (D-VA) did not either. Kaine's wife, Anne Holton, was the Secretary of Education for the commonwealth under McAuliffe from 2014-2016 when he was governor. She has also campaigned with McAuliffe, whose campaign also did not return the outlet's request for comment.

Meanwhile, U.S. Sen. Make Warner (D-VA) claimed during an impromptu interview he hadn't heard about it:

The Star asked Sen. Mark Warner (D-VA) what he thought of the allegations during an impromptu interview at Reagan International Airport Wednesday.

“I’ve heard nothing about it,” Warner said.

He dodged further questions by saying, “I think it’s really important, especially when you’re talking about a crime – get the facts first,” and then, “I don’t normally comment on open cases.”

While it's particularly egregious that the commonwealth's top Democrats at both the state and federal level haven't given the allegations the attention they've deserved, they're hardly the only ones asleep at the wheel.

Luke Rosiak with The Daily Wire, who exposed the allegations Smith had made, notes that when more media outlets finally covered the story, they failed to give proper credit.

Local news outlets who do not credit @realdailywire for what is happening in Loudoun are omitting a key issue for their readers: The concealment. This did not just happen on its own. They were not planning on telling anyone about any of this until they got caught & had no choice.

This case is not about transgenderism except that the desire to pass that policy provides a motive for their dishonest conduct.

And that, like this proclamation, it shows that school boards spend more of their time focusing on hyper-political, non-education issues than on kids.

Rosiak also noted that the first agenda item at a recent Loudoun County School board meeting was to resolve that October be declared "LGBT History Month."